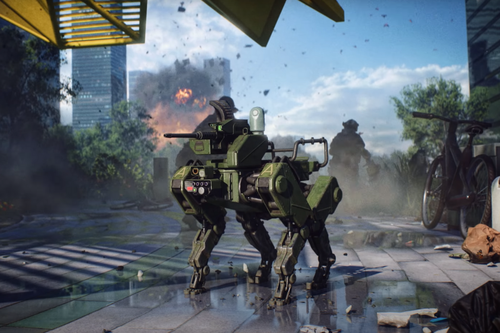 A robot dog equipped with machine guns and HoloLens-style tactical visors are just some of the technological toys on display in the reveal trailer for the upcoming Battlefield 2042 video game.

The bombastic trailer showcases a plethora of over-the-top military action and hints at a near-future military tech that’s being developed and discussed today.

Spot, is that you?

The trailer sees a green handled container landing on the streets of Sogdo, South Korea, as soldiers fight for control of a quantum-powered disinformation hub – only for a robot bearing resemblance to Boston Dynamics’ Spot emerge from within, sporting a machine gun.

The literal dog of war then sprints into the battlefield, far outpacing its human allies.

The first steps towards making this vision a reality have already been taken: back in April, the NYPD had to terminate its $94,000 contract with Boston Dynamics after drawing criticism for using a robot named ‘Digidog’ during routine arrests, as well as potentially failing to disclose its partnership with the robotics firm.

Unlike the factions of Battlefield 2042, the NYPD used its comparatively more placid robot to send food into hostage situations. The police also fitted its robot with an arm so that it could open doors and move objects.

Following the termination of the contract, City Councilman Ben Kallos introduced legislation to ban the department from using “weaponized” robots.

The game being set in 2042 allows DICE to take countless liberties when it comes to designing how the future of the military might look like. But after the US Army ordered up to 120,000 custom HoloLens augmented reality systems from Microsoft in early March, the soldier's headsets depicted in the game may offer a glimpse of what's to come.

The US Army will pay up to $21.9 billion over 10 years to Microsoft, in exchange for the high-tech headsets which would project digital images into the soldiers’ field of view.

In the Battlefield 2042 trailer, ground forces are equipped with a variety of facial headgear – from transparent visors to more technical eyewear – a potential nod to the HoloLens of tomorrow.

According to industry insider Tom Henderson, a prominent leaker specializing in military shooter games, the soldiers in the game represent task forces from ‘fallen nations’ recruited to fight for the remaining superpowers – so they would not be likely to be wearing the same equipment.

Our electronics are offline

In a recent interview with AI Business, George Frangou, founder and CEO of British startup Massive Analytic, said that twenty-first-century wars “will be like nothing seen in history, waged using robots and AI.”

Frangou, whose company won a 2019 Defence and Security Accelerator (DASA) competition to investigate applications of AI in the invisible battlespace, warned of the necessity to develop systems that will stop hostile forces from hacking into military communications.

Such systems may not be very useful on Battlefield 2042’s frontlines – since the game takes place after the events of Battlefield 4, which involved large-scale EMP attacks. Nonetheless, the marketing of the new game revolves around digital glitches, which might hint at some of the spoofing and electronic warfare measures Frangou described.

Battlefield 2042 boasts the largest online player count of any game in the franchise – with up to 128 players competing in a single match on PC, PlayStation 5, and Xbox Series X, up from the usual 64.

To improve player experience, the game will feature AI-based ‘bots’ – simulated players which will make up the in-game numbers so that every match is full.

This could also allow newer players to adjust to the game with a less aggressive enemy.

The difficulty of the AI-based teammates will reportedly be automatically updated over time to provide players with an appropriate level of challenge as they progress.

Developer DICE confirmed in a Q&A session following the game’s reveal that progression would work the same way whether competing against ‘bots’ or human players.

Battlefield 2042 is expected to launch on October 22 on PC, PlayStation 5, PlayStation 4, Xbox Series X, and Xbox One.