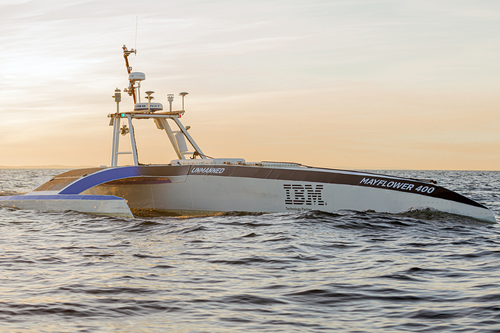 On June 15, the Mayflower Autonomous Ship (MAS) set sail to try and become the largest autonomous vessel to cross the world's second-largest ocean.

Just two days later, the ship suffered a mechanical issue and was forced to return to shore.

After finding itself in “a bit of a pickle,” the crippled vessel now sits in Plymouth, the UK, waiting for a second shot at reaching Cape Cod – some 400 years after pilgrims made the same trip across the Atlantic.

Are autonomous ships ready to brave the world’s oceans? AI Business spoke with leading maritime tech and AI experts to find out.

The setback of the MAS project wasn’t the biggest shipping fail to make headlines this year. That honor goes to the Ever Given, a massive container ship that blocked the Suez Canal for almost a week in March.

The 1,300ft vessel obstructed the major shipping lane, forcing others to take the much longer route around the southern tip of Africa, and subsequently disrupting a sizeable portion of the world’s trade.

He added that AI-based systems could have warned a human captain of potential risks when entering the canal due to strong winds – thereby avoiding the incident altogether. At the same time, he noted that no AI system could protect from a sudden gust of wind steering the vessel dramatically off course, much like in the case of the Ever Given.

For an AI system to succeed in such an environment, it would need to be capable of dealing with any curveballs, and according to Stephens Scown partner Thomas Chartres-Moore, the technology isn’t there yet.

But for Orca AI co-founder Dor Raviv, traveling along a congested canal with limited maneuverability is an obvious use case for AI. He said that while cataclysmic events like Ever Given don’t happen all too often, they’re catalysts for the adoption of new technologies.

“We believe that the use case for safe ship navigation is a strong use case. Despite a continuing effort to keep the large assets safe and secure, the number of incidents doubled in the last five years, and cost billions to all stakeholders in terms of environmental damage,” Raviv said.

“When you're trying to understand solutions, you must first understand what is the pain and how big is that pain. No one could have ever seen this kind of event would lead to such loss.”

The cost of Concordia

Another major shipping incident that is still fresh in the memory was the Costa Concordia disaster. Early January 2012 saw an Italian cruise ship sinking after accidentally striking an underwater rock. 32 people died, and the captain, Francesco Schettino, would go on to be found guilty of manslaughter.

Chartres-Moore suggested that the introduction of AI could have helped avoid such a disaster. However, he added that such issues may still apply with an automated officer of the watch.

"During the disaster, conflicting orders were issued which added to the confusion and cost valuable time. Is it possible to eliminate the possibility of similarly conflicting orders with an AI in charge? Maybe not. Especially if the ship is being run as a sort of AI-human hybrid."

“Whose commands take priority, and when? Similarly, the captain of the ship and the helmsman experienced difficulties communicating due to language issues – steps will need to be taken to ensure that the AI is properly integrated, and that the crew is properly trained, so that they can ‘speak each other’s language,’ even in a time of crisis.”

To stop issues originating from human error, Raviv and the Orca AI team have developed an automated officer of the watch. The system serves as the lookout unit on an autonomous ship project in Japan. It uses computer vision, relying on high-resolution thermal cameras.

Orca places its own computing systems onto ships to process the video its cameras capture, and then correlate that with navigation sensors on board to recreate the duties of the officer of the watch.

“Even though the officer of the watch has radar and maps, they still rely heavily on their eyes, intuition, and context on decision making and this is exactly what AI today is excelling at – understanding context from data,” Raviv said.

"We now have onboard systems that alert and prioritizes risks to the crewmember in real-time. We also collect the behavioral data, upload it to the cloud, and present actionable safety insights for fleet managers and chief operating officers to enhance fleet safety."

Orca's system provides 360-degree visual coverage and can identify and track objects, with the information transferred into path planning and collision avoidance systems.

Looking out the crow’s nest towards the future

What about the MAS? Has the initial setback strained trust in autonomous shipping? Not so, according to Gordon. Instead, he points to autonomous road vehicles, and that should such an incident occur there, it wouldn’t be as catastrophic.

“The technology can only work if the mechanical components are well designed. If anything, AI can prevent mechanical faults if all components are connected. They would be able to detect anomalous movements of parts signaling potential wear and tear, et cetera,” he said.

Since the malfunction wasn't AI-specific, it is unlikely to harm the MAS team's reputation or lead people to abandon any hopes they had for the voyage, Chartres-Moore agreed.

Instead, he suggested an increase in big players coming to the market over the next five to 10 years.

"Already there are plans for Intel and Rolls Royce to collaborate to launch a remote-controlled unmanned coastal vessel by 2025 and have an autonomous unmanned ocean-going ship by 2035. Abu Dhabi Ports' decision to become the owner of the world's first fleet of autonomous commercial tugboats is another huge boon for the industry."

Raviv went on to remind that the MAS project is less of a business case, and more of a proof of concept.

“These projects are amazing and taking the industry forward, but you need to find a solid business case around it.”

Away from MAS, a more substantial business-oriented case saw the launch of Europe's first commercial robotaxi service. Not a driverless car, but a bright yellow ferry that takes you to a Dutch golf course.

Dubbed Vaar met Ferry, the vessel takes pedestrians across the waterways of Teylingen, a municipality in the western Netherlands, to the Koudenhoorn island, a popular tourist and recreational destination.

Raviv praised the service, describing it as “a great technological milestone.”

“This is a great achievement for the industry, and I'm looking forward to seeing more adoption of these technologies day in day out,” he added.

While the Dutch ferry might have crossed from fiction to reality, MAS has some way to go to reach its goal. But one thing is certain: it's not just road cars that will be made autonomous.