Robotics and artificial intelligence: The role of AI in robots by Alan Martin, Freelance reporter  11/26/2021 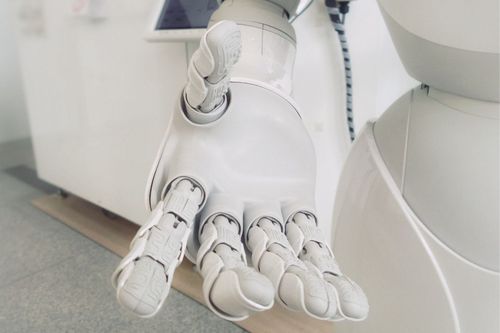 It may be obvious, but robotics and artificial intelligence are two very different disciplines.

While you can have robots with artificial intelligence, it’s equally possible for robotics to flourish without AI, and indeed most systems currently do.

On this page, we’ll explain the differences between robotics and artificial intelligence, as well as exploring areas where AI is used in cutting-edge robotic technology.

Robotics is the branch of engineering and computer sciences where machines are built to perform programmed tasks without further human intervention.

That’s a pretty broad definition and covers everything from a simple, mechanical arm that assembles cars, all the way to something out of science fiction like Wall-E or Amazon’s upcoming Astro ‘Alexa on wheels’ home robot.

Traditionally, robots are used when tasks are either too difficult for humans to perform well (e.g.: the movement of extremely heavy parts on an assembly line), extremely repetitive or both.

A robot will happily do the same exhausting task over and over again each day. A human will get bored, fatigued or both and that’s when mistakes slip in.

Are robotics and artificial intelligence the same thing?

Artificial intelligence is where systems emulate the human mind to learn, solve problems and make decisions on the fly, without needing the instructions specifically programmed.

Robotics is where robots are built and programmed to perform very specific duties.

In most cases, this simply doesn’t require artificial intelligence, as the tasks performed are predictable, repetitive and don’t need additional ‘thought’.

What is the role of artificial intelligence in robots?

Despite this, robotics and artificial intelligence can coexist. Projects using AI in robotics are in the minority, but such designs are likely to become more common in future as our AI systems become more sophisticated. Here are some examples of existing robots that use AI.

Examples of robotics for households 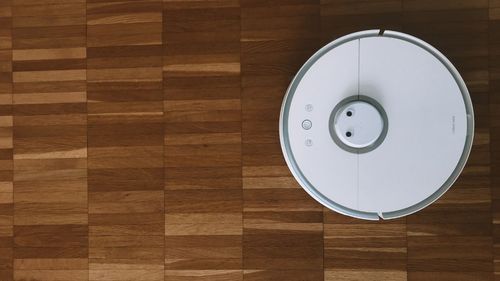 The most obvious example of robots for households using AI is Amazon’s upcoming Astro bot.

Essentially an Echo Show on wheels, the robot uses artificial intelligence to navigate autonomously around the home, acting as eyes and ears when you’re not around thanks to a periscope camera.

This isn’t entirely new, as robot vacuums can also navigate around furniture. But here, too, AI is playing a greater role.

Most recently iRobot, the company behind Roomba, announced that new models will use machine learning and AI to spot and avoid pet excrement.

Examples of robotics in manufacturing 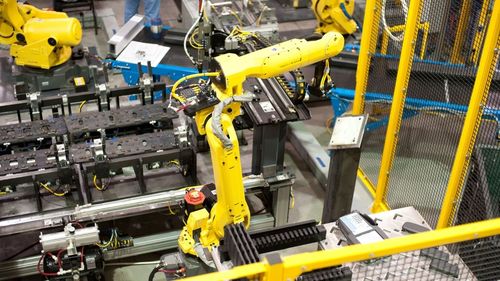 The scope for robotic AI in manufacturing, also known as Industry 4.0, is potentially more transformational.

This could be as simple as a robot algorithmically navigating its way around a busy warehouse, but companies like Vicarious are using AI on turnkey robotics where the task is too complex for programmed automation.

It’s not alone in this. Another example of how robots are used in manufacturing includes the Shadow Dexterous Hand, which is agile enough to pick soft fruit without crushing it, while also learning via demonstration, potentially making it a game change in pharma.

Examples of robotics for business 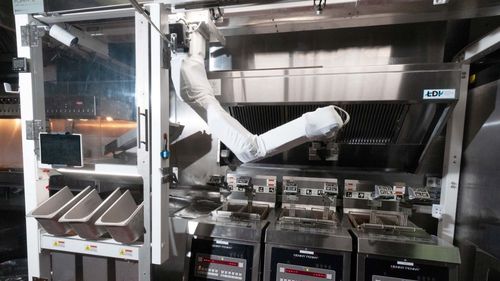 For any business that needs to send things in a four-mile radius, Starship Technologies’ delivery robots are a clever innovation.

Equipped with mapping systems, sensors and AI, the little robot on wheels can figure out the best route to take on the fly, all the while avoiding the dangers of the outside world.

In the catering space, things are getting even more impressive. Miso Robotics’ Flippy uses 3D and thermal vision to learn from the kitchen it's in, and can acquire new skills over time, even though it’s named after the simple art of flipping burgers. Moley’s Robotic Kitchen is also a possible insight into the future of catering.

Examples of robotics in healthcare 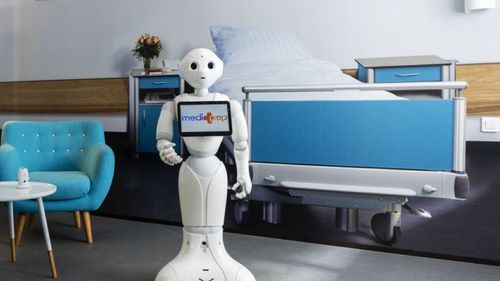 Medical professionals are often tired and overworked, and in the world of healthcare, fatigue can have fatal consequences.

Robots don’t get tired, which potentially makes them a perfect substitute, and so-called “Waldo Surgeons” are capable of performing operations with incredible accuracy and a steady ‘hand.’

But robots don’t have to be able to perform the duties of highly trained surgeons to be useful.

More basic examples of robots in healthcare can free up medics’ time by taking care of lower skilled work. Moxi, for example, can do everything from distributing PPE to running patient samples, allowing the human doctors more time to care.

And during the coronavirus pandemic, Cobionix came up with a robot that can administer needleless vaccinations, without needing any kind of human supervision.

Examples of robotics in agriculture 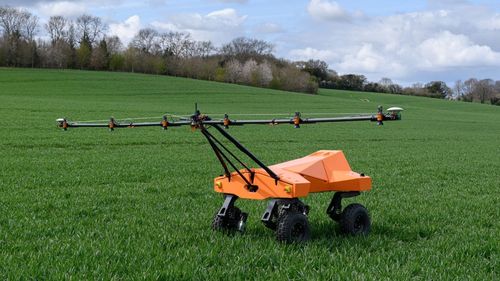 As in healthcare, the future of robotics in agriculture could make labour shortages and worker fatigue feel less acute, but there’s another big potential advantage: sustainability.

Iron Ox, for example, uses AI and robotics to try and ensure that each plant gets the optimal level of sunshine, water and nutrients required to ensure it grows to its full potential.

With each plant analysed with robotics and AI, less water is wasted and farms produce less waste. The idea is that the AI will continue to learn from the data, improving yield for future harvests, too.

Another example of robots used in agriculture is, the Agrobot E-Series, can not only harvest strawberries with its 24 robotic arms, but uses its artificial intelligence to assess the ripeness of each fruit harvested.

Examples of robotics in aerospace 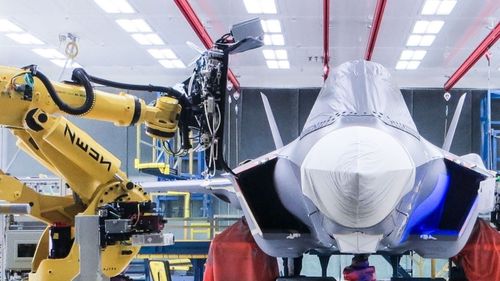 While NASA is currently looking to improve its Mars rovers’ artificial intelligence and working on an automated satellite repair robot, other companies are also keen to improve space exploration via robotics and AI.

Airbus’ CIMON, for example, is a kind of Alexa in space, designed to assist astronauts with their day-to-day tasks and reduce stress via speech recognition, while also operating as an early-warning system to detect problems.

And NASA isn’t the only team working on autonomous rovers, either. iSpace’s own rover could, with the help of onboard tools, be responsible for laying the foundations of a ‘Moon Valley’ colony away from Earth in the not-so-distant future.

Examples of robotics for military 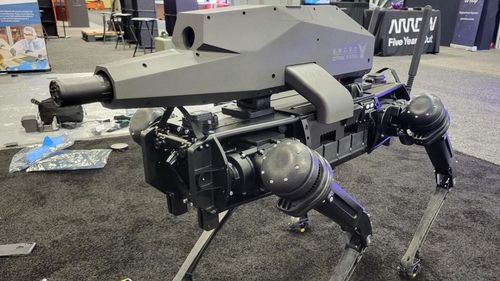 For obvious reasons, the military is less keen to shout about its achievements than others using robotic AI for less controversial purposes, but the future of AI weapons is very real and autonomous military drones have seen actual combat.

What about software robots and artificial intelligence?

To make things a bit more confusing, the term “bot” — an abbreviation of “robot” — can also be used to describe software programs which autonomously complete tasks. And these sometimes also use artificial intelligence.

Software bots aren’t a part of robotics, as they have no physical presence, and the term can describe anything from web crawlers to chatbots.

The latter of these embraces artificial intelligence to respond appropriately to messages sent by humans.

Why wouldn’t you want to use artificial intelligence in robotics?

The main argument against using artificial intelligence in robots is that, in many cases, it simply isn’t necessary. The tasks currently outsourced to robots are predictable and repetitive, so adding any form of AI would simply be overkill when the work doesn’t require additional ‘thought’.

But there’s a flip side to this, and it’s that, to date, most robotics systems have been designed with the limits of artificial intelligence firmly in mind.

In other words, most robots have been created to perform simple, programmable tasks, because there wasn’t much scope for them to be able to do anything more complex.

Robotics involves the creation of robots to perform tasks without further intervention, while AI is how systems emulate the human mind to make decisions and ‘learn.’

While you can have robotics with an AI element (and vice versa), both can, and usually do, exist independently of each other.

For most robots, designed to perform simple, repetitive tasks, there’s no need for advanced AI as the duties are simple, predictable and pre-programmed.

But many such AI-free robotics systems were created with past limitations of artificial intelligence in mind, and as the technology continues to advance in leaps and bounds each year, robotics manufacturers may feel increasingly confident in pushing the limits in what can be achieved by marrying the two disciplines.

The cited examples of AI in manufacturing, aerospace, healthcare and agriculture highlighted above can certainly leave us feeling confident that the future is bright for robotics and artificial intelligence.

The next big innovation may feel like science fiction today, but eminently possible tomorrow.