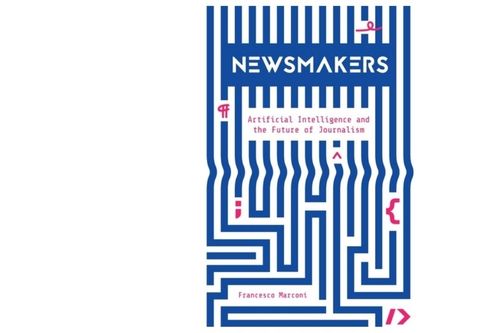 It’s that time of year when we all reflect: be it on the year's antics or conversations and consequences from years past.

This year, my mind went back to a conversation with Bennie Mols, the renowned science journalist from the European Science-Media Hub.

Earlier this year, Mols and I spoke of journalism in the next few years and AI’s place in the newsroom.

He suggested that some huge newsrooms are experimenting with AI tools, but the adage of job replacement fears didn't face the veteran.

Rather than ‘robo-journalists’, one of the most potent uses of AI in journalism today is in transcribing. Tools like Otter and Trint enable writers to greatly accelerate what was once a wretched, time-consuming nightmare.

One man has made it his job to define, disseminate and detail AI’s impact in the future of journalism: Francesco Marconi.

The computational journalist previously served as co-lead of the Associated Press’s AI and newsroom automation team, and more recently, the R&D chief for the Wall Street Journal.

In his book, Newsmakers: Artificial intelligence and the future of journalism, Marconi, suggested machines will not replace the most important roles of the journalist. Instead, fueling writers, providing them with more opportunities to go deeper into stories and actively connect with readers.

His book provides a fascinating and well-penned insight into how the production of the news you consume and enjoy may be augmented and enhanced by AI in the near future.

AI in the media

Throughout his book, Marconi refers back to the idea of augmentation rather than automation.

He does refer to the decreasing sizes of newsrooms but does not lay the blame on AI. Far from it. Instead, he stresses that AI systems won’t replace writers, saying that replicating human judgment “is not an inevitable technological outcome.”

Instead, the biggest issue he points to in terms of journalism and AI is the need for the former to accept the latter.

“Journalists need to understand machines enough to know they won’t replace them, but it’s natural and necessary for them to reserve a dose of skepticism about AI,” he writes.

“It’s up to the industry to consider the tradeoffs that the technology presents. At the same time, news organizations should not become paralyzed by the strategic choice of whether and how to adopt AI."

Going back to Mol’s earlier comments on the larger newsrooms, the likes of Bloomberg, Reuters, and The Washington Post all have the purse strings to experiment with AI at far greater levels than a local newspaper.

But even at the smaller level, Marconi's writing reminds us that increasingly newsrooms are hiring multitalented employees who understand both computer programming and investigative journalism.

And that’s not to say those not in the know are left behind. The former WSJ R&D chief instead stresses the need to train all staff.

“Training can reduce fears associated with the uncertainty of changing roles and inspire staff to become more enterprising in their work.

Journalism isn’t exactly an industry that tech developers look at with eager eyes. But while automotive or healthcare is more exciting, journalism, and media as a whole, sets the standard of how consumers view the world.

It is therefore integral to have works like Marconi’s to fully grasp the important need to understand how profound technological change would be on the media.

“AI will not replace journalism. Journalists will always need to put the pieces together, to construct narratives through which we understand the human experience,” said Marconi.

Newsmakers: Artificial intelligence and the future of journalism is available via Amazon, Barnes & Noble and Blackwell’s