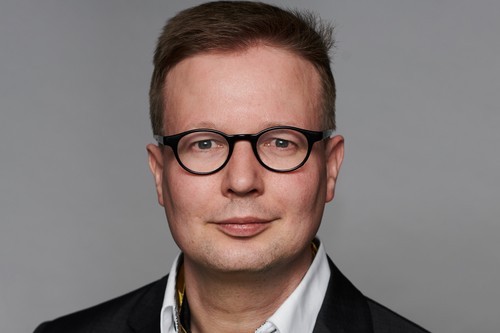 More often than we realize at the first moment, a harmless, simple question turns into a nasty brain teaser.

Can Artificial Intelligence be creative? I got this one while working on my book about enterprise AI.

We read it everywhere: AI composes music, creates pictures, and writes poems and prose. Is this real creativity coming right out of our laptops and computers?

Here is my answer to the question – and the details of how AI creativity relates to the boy band New Kids on the Block.

Why Aiming for AI Creativity?

One goal, two motivations: Two schools of thought drive the research of the common challenge of mastering artificial intelligence creativity.

One motivation is the desire to understand how our human brain works. Pointedly, they want to build a system that, fed it with the knowledge of the young Albert Einstein, delivers Einstein’s Theory of Relativity and explains his thoughts process.

Researchers at Cornell University, for example, created a system that, based on experimental data, derives various laws of physics such as the conversation of energy. It might not get them the next Nobel Prize, but it is a starting point to understand human creativity. The grand dame of Cognitive Science, Margaret Boden, named such insights p-creativity or psychological novelties. New to the system or human who came up with it, but the idea existed already.

The big question that emerges is obvious: Why would a company train a system for weeks or months to get what any physics student knows?

A system (or someone) should create new insights not previously known to anyone in the world. Boden named such insights h-creativity or a historical novelty. They drive academic research and corporate innovations with unique outcomes. However, the exact path to enlightenment and the thought process is secondary.

We want to feed a Siri with today’s physics knowledge to get a Nobel Prize-worthy 21st century’s Theory of Relativity 2.0 from Siri. We want an Android Assistant that composes and generates the next Top 10 electronic music hit.

Mozart was a creative mastermind. He composed over twenty operas and around 60 symphonies. But he is not famous for just composing many great operas and symphonies.

We still know him today because he invented his Mozart style. It is a simple example illustrating two of Bode’s three ways to derive novel ideas:

Explorative creativity is finding new instances for a given pattern: composing a piece of music in Mozart’s style. Figure 1 illustrates explorative creativity using stars, planes, and old telephone symbols: four symbols are green, followed by a red one. So, for a floppy disk symbol, the pattern would be the same: four times green followed by one in red. 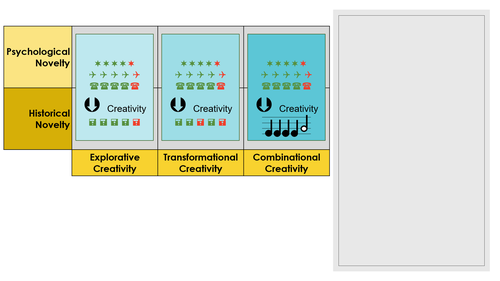 Transformational creativity changes rules, paving the path to thinking the unthinkable. Schoenberg’s twelve-note compositions from Vienna around the 1920s demolished the restrictions of diatonic scales, which, e.g., Mozart relied upon for his works. Picasso and Braque’s were crucial for cubism and the new way of seeing and painting objects. Figure 1 illustrates the same with the stars, planes, phones, and floppy disks example pattern. When looking at the upper three rows with stars, planes, and phones, derive six rules:

Transformational creativity means keeping many but changing one or a few rules. In our example, we change rule (4) from “green symbol at position three” to “red symbol.” As a result, the third – and not only the fifth – floppy disk is red. We get a new pattern, similar to the established one but slightly different.

Combinational creativity mixes ideas or puts them in a new context. It is about associations, such as applying our understanding and patterns of our solar system to the subatomic world. Another example is using the round-robin approach for organizing tournaments as inspiration for a workload-distribution algorithm in cluster computing. Or, as Figure 1 illustrates, using four green symbols followed by a red one as an inspiration to compose a music theme with four same notes followed by a fifth, higher note.

Artificial Intelligence has two essential directions, both dating back to its beginnings in the 1950s and 1960s.

The second direction, Computational Intelligence, covers many popular topics and approaches, including Machine Learning, Neural Networks, and Deep Learning. These approaches feed training data to AI systems: large sets of pairs with input data and matching results. The AI system unveils and learns the hidden patterns from the training data. Computational intelligence is the approach of choice of the 2010s and (early) 2020s. Most commercial AI solutions follow this path. So, we take a closer look at his direction and the GPT-3 language model, a well-known representant. When you provide a few sentences to GPT-3 as input, the model writes a complete text. Introduction-level AI courses teach students to train a (very simplistic) model for composing. Collect some training data, train the model, provide the beginning of a music piece – and the AI returns you a complete piece. AI takes over the work of composers. Is it so simple? Does AI replace the artists and creatives of the world?

Neural networks and machine learning is about AI algorithms identifying patterns in training data. In other words, neural networks enable exploratory creativity: Composing like Mozart, not becoming the next Mozart. A famous example for exploratory AI-driven creativity is the work of Emmy Cope, who is well-known for his Bach-like AI-generated music. (link/embedding)

AI-based transformational creativity has conceptual limitations. A computer can list all potential songs one can compose as a sequence of 1000 notes. Also, AI can break any given rule learned from Mozart’s music. But randomly breaking some rules or modifying weights in a neural network only helps with judgment: Does the music get better when AI changes the rules – or does it sound terrible, even for Schönberg’s disciples? And how would you measure this? Obviously, the wish for combinational creativity is even more challenging to realize with AI.

October 25th. It is a late Autumn day in New York in the year 2018. We are at the heart of the worldwide art circus: auction day at Christie’s! The first-ever auctioned, AI-generated picture, “Portrait of Edmond de Belamy,” sells for an unbelievable $432,500. So, there is a market for AI Arts, the consequent next step in the tradition of Generative Art. In Generative Art, artists define rules and describe how to create the picture, other pieces of art, or texts. One example of Generative Art is the work of the artist and later University of California in San Diego Professor Harold Cohen. In the 1970s, he started to work on his AARON program. AARON generated artwork in his particular style. Major museums around the world exhibited this work.

Besides the success of a few artists, AI-generated art is a niche. Only a few might make a living with that, probably the first few ones. Being first matters in art: producing the first ape-made selfie or being the first artist incorporating a self-destroying mechanism in the frame of a picture. So, potentially the novelty (or: transformational creativity) of using AI as a new tool is the foundation for AI Arts success. A novelty that probably diminishes over time. More importantly, AI arts might get headlines for auction sales, but it does not change the corporate world. In contrast, AI that automates creative tasks changes the business world.

There are already various use cases where AI helps scale out massively and automizes creating individualized creative pieces of work. A weather forecast, climate information, simple press texts with sports results. AI produces texts such as “January is typically the coldest month of the year. Daytime maximum temperatures average around a freezing 3°C (37°F).” These texts do not win the Pulitzer Prize. Still, we humans seem to prefer them over naked tables and diagrams – and AI can generate them for every point on the earth 7/24 for weather forecasts and each football match in the lowest leagues day after day or weekend after weekend.

In 2016, IBM’s Watson created the first AI-produced movie trailer for the Sci Fi-horror-action movie “Morgan,” usually a task for creative professionals. One or two years later, IBM partnered with Tommy Hilfiger and State University of New York’s Fashion Institute of Technology. In this joint project, IBM’s Watson AI system assisted designers in creating new styles based on the “Tommy Hilfiger” style. It can create massive numbers of unique pieces of clothes (or other objects), all following the same master pattern and style.

Lastly, do not forget innovation and creativity can relate to the context of a product or service, not only to the main product.

Maurice Starr and Columbia had an enlightening moment of combinational creativity: New Kids on the Block. The band’s music did not revolutionize the history of compositions. But applying the boy band concept previously known from R&B music to pop music was brilliant and a commercial game changer.

It might take a while till neural networks trained in composing pop songs mastermind such a coup. And, honestly, I am not so sure whether I really, really want that.

Klaus Haller is a senior IT project manager with in-depth business analysis, solution architecture, and consulting know-how. His experience covers data management, analytics and AI, information security and compliance, and test management. He enjoys applying his analytical skills and technical creativity to deliver solutions for complex projects with high levels of uncertainty. Typically, he manages projects consisting of 5-10 engineers.

Since 2005, Klaus works in IT consulting and for IT service providers, often (but not exclusively) in the financial industries in Switzerland.