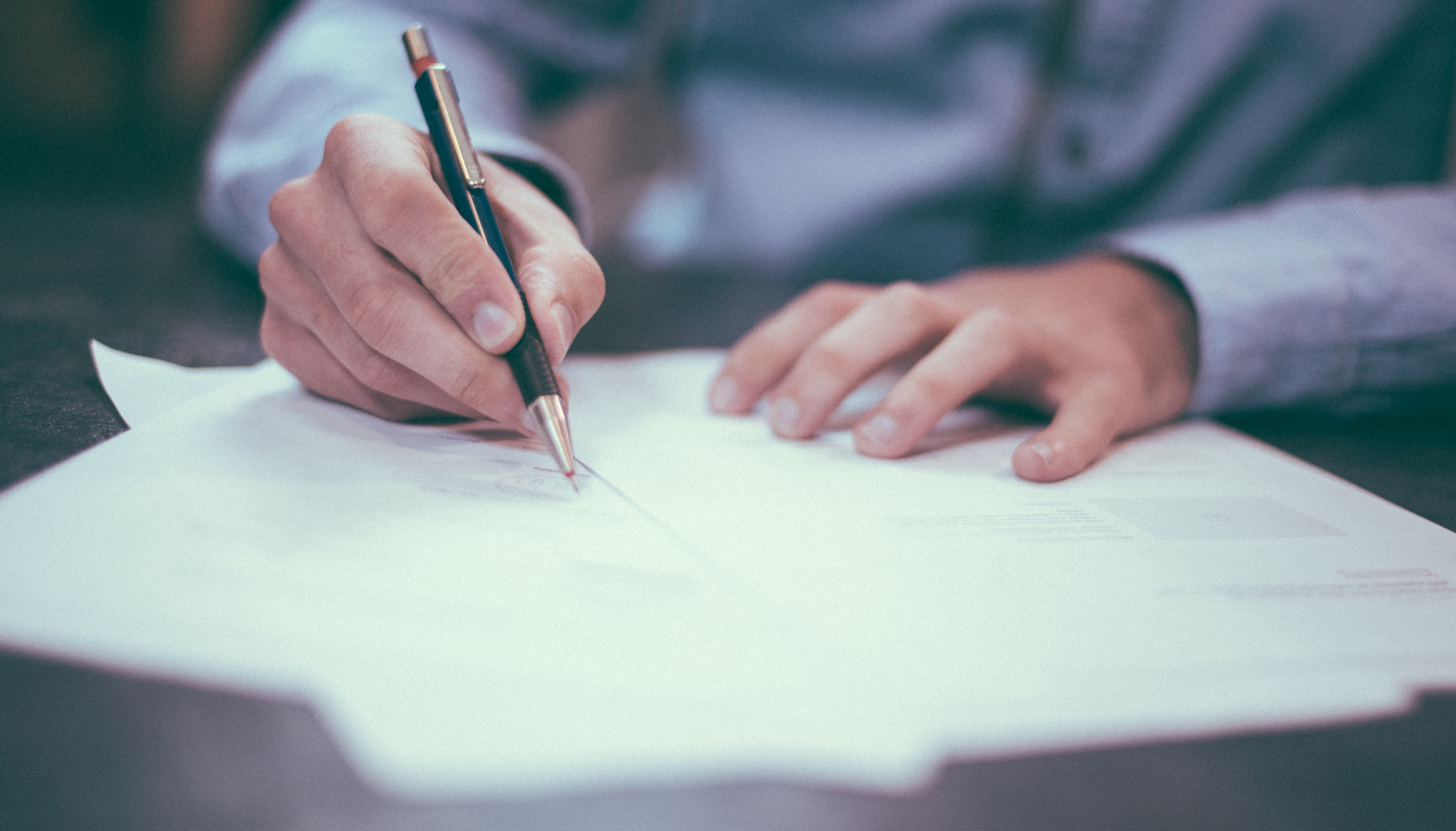 Whereas some claim - rather strongly - that paralegals could become redundant within ten years, the real discussions taking place within the sector today centre around which aspects of legal work AI will ultimately change. "One question lurking in all this is whether someone can come in and do to law what Amazon did to bookselling," Professor Richard Susskind, co-author of The Future of the Professions, told the Financial Times last year. "We won't see anything as dramatic, but we will see incremental transformations in areas like the way documents are reviewed and the way legal risk is assessed."

Legal experts are adamant that the nature of lawyers' work will remain fundamentally unchanged, removing much of the slow, manual elements of the job in order to enhance executive decisionmaking. Just as doctors must ultimately still produce a diagnosis, lawyers will remain front and centre of the legal profession. "As with the medical profession, where AI tools are already being used for early cancer diagnosis, lawyers will increasingly use AI as a diagnostic tool to support their work in myriad ways," wrote Robert Morley, COO at Excello Law, earlier this year. "But however fast and versatile, AI will remain a tool, incapable of creative, independent judgement  the essential elements in the job of a lawyer." 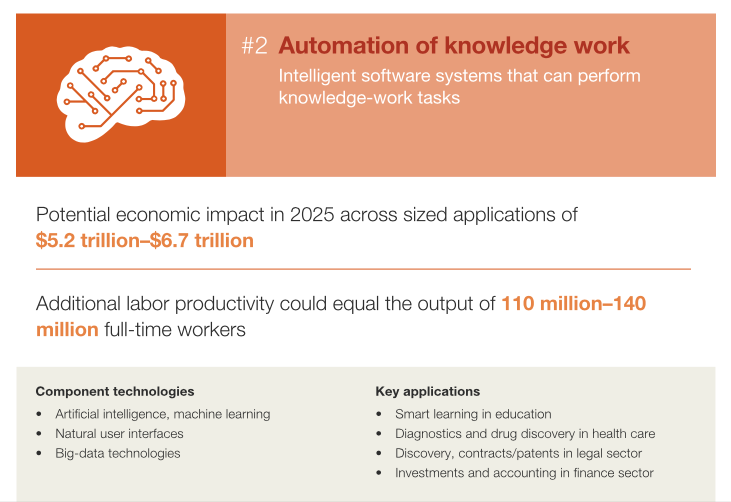 The end of knowledge workers?

These discussions can be located in the wider conversation surrounding knowledge automation. A report by consultancy firm McKinsey (Four fundamentals of workplace automation, 2015) estimated that knowledge automation, made possible by computing advances such as machine learning and 'natural' user interfaces, will affect 230+ million workers - or 9% of the global workforce. The largest potential impact to common business functions will be in clerical and administrative work - the mainstay of the legal sector. McKinsey predict this could subsequently drive efficiencies of between $1.7 to $2.2 trillion, or possible productivity gains of 30-40% by 2025. It's for this reason that McKinsey also listed the automation of knowledge work as the #2 most disruptive emerging tech trend.

"These capabilities not only extend computing into new realms, but also create new relationships between knowledge workers and machines. This has the potential to provide more timely access to information and raise the quality and pace of decisionmaking and, consequently, performance," the authors argued. "Automation of knowledge work could bring great societal benefits - such as improved quality of healthcare and faster drug discovery - but may also spark complex societal challenges, particularly in employment and the education and retraining of workers." These so-called threats, however, could be unfounded. Estimates show that, despite the apparent risk of redundancies, the number of jobs for knowledge workers is actually accelerating.

There is, then, a major challenge ahead, but also an opportunity for knowledge workers to become involved in the transformation of their own work processes. As the amount of data continues to increase dramatically across the globe (some suggest 90% of the worlds data has been created in the last two years), capturing meaningful data and automating knowledge within organizations has arguably never been more important," argues Andy Daws, Chief Customer Officer at Kim Technologies. "Fortunately, this so-called 'rise of the knowledge worker coincides the rise of emerging technologies that mean old problems can be addressed in new ways." 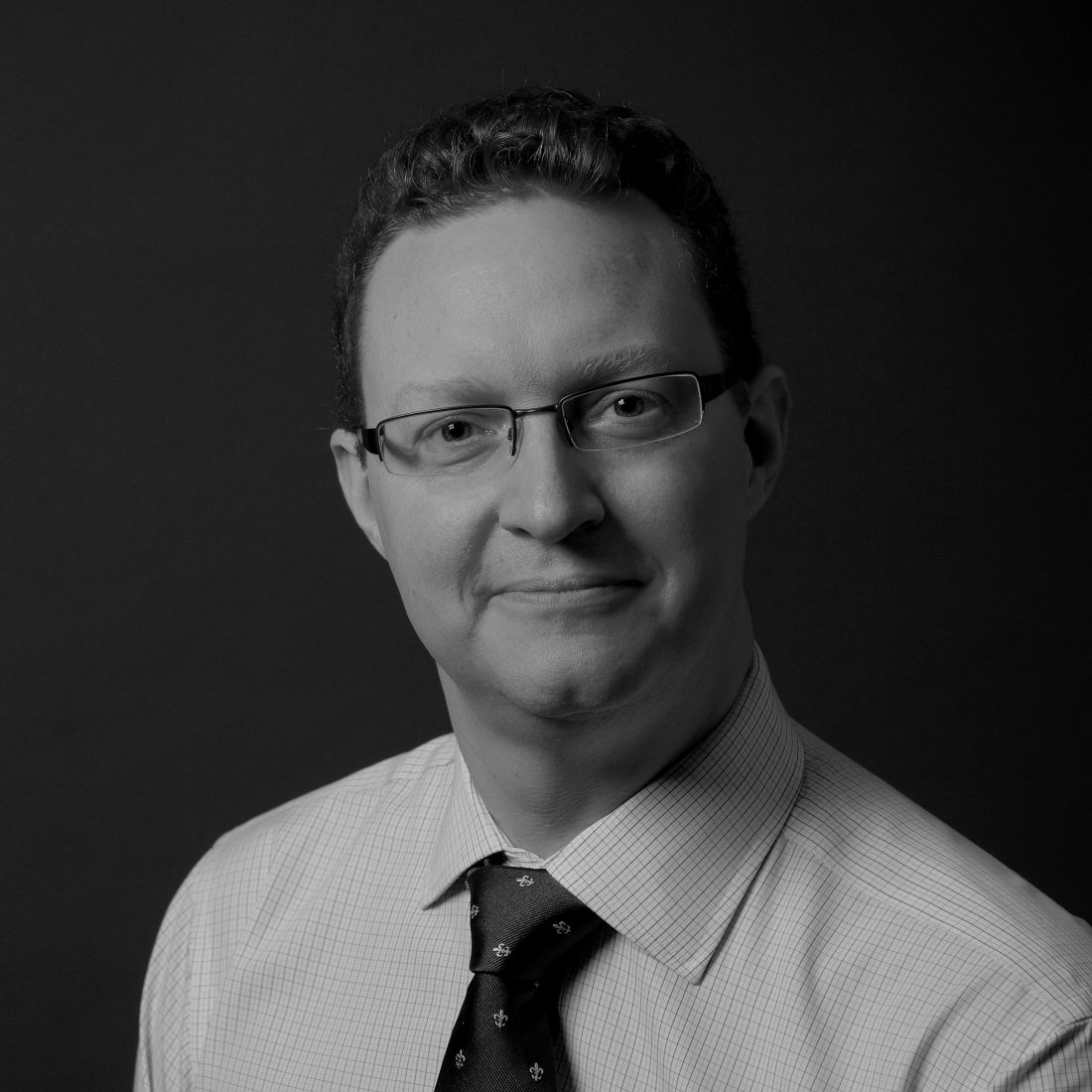 A founding member of the Kim Technologies team, Daws has a successful track record in combining people, processes and technology to build disruptive new entrants in the HR and Legal markets on both sides of the Pond. Kim Technologies' self-described remit is to empower knowledge workers who have little to no IT programming experience with the tools to create entirely new, efficient workflow and document processes with the help of AI.

"A great example of this is the trend towards configuration versus coding, which places AI front and center of the knowledge automation landscape," Daws explains. "Remember when you had to learn to write HTML code to create your own website? That all changed with the advent of configurable software which has enabled millions of users to create multifaceted websites themselves using an intuitive interface. Users don't need to understand the technology behind them, they just want a website."

"Now, imagine if that same approach could be applied to automating business processes, workflows, documents, and dashboards. Knowledge workers are empowered to automate for themselves from their own PC on one platform with no IT coding required. That's accessibility!"

The obstacles to knowledge automation

Technical expertise remains an obvious hurdle, albeit one that enterprises are able to overcome using the kinds of solutions Daws describes. However, he believes that there are a number of bigger practical obstacles in the way that must be reckoned with in order to make the automation of knowledge work a success.

One of the most common such obstacles is what Daws loosely refers to as 'the legacy data problem'. "It can be very difficult to know how or where to embark on a knowledge automation project when faced with existing software siloes, incomplete and unstructured data, and variously outdated underlying systems," he explains. "Many customers will take the opportunity to put their own 'data house' in order at this point, but that can easily multiply the time and cost elements of any automation project. Others prefer to draw a line in the first instance and at least start automating their knowledge and processes going forward."

"Either way, buyers often feel caught between the proverbial rock and hard place. On the one hand, there are a plethora of vertical 'point solutions' designed to automate a very specific task or activity. These off-the-shelf options are often (though not always) quick to implement, but offer limited-to-no flexibility and tend to create more siloed datasets when cobbled together. Alternatively, the traditional unifying platforms are highly customisable, but at a huge cost in terms of time, money, and effort. Neither option is ideal, but thankfully, emerging technologies are creating a 'third way'."

Aligning data and business strategy has emerged as a top priority for organizations looking to get ahead in today's tech landscape, as PwC award winner Joseph Voyles explained to AI Business earlier last month. If data is not aligned with consumer priorities in mind, organizations will begin at a disadvantage and find it difficult to deliver consumer-centric solutions," Voyles said. "The most mature companies  or those that have seen effective AI applications  are those that have grown up with data playing a central role in the way that products and services have been delivered. Companies that are able to capitalize on their data, adapt their business, and stave off competition from smaller organizations will be those that can effectively apply AI."

Daws goes further, arguing that data can no longer be seen as a mere by-product of operations. "One of the keys to success is in aligning the business and data strategy, and understanding the ways in which the two interrelate," he says. "Historically, many organizations have seen their data merely as a by-product; the output of business operations derived from a business strategy. Often, little thought has been given to what data is collected or how it is analyzed."

"Many of our customers are turning that perspective on its head and understanding the value of data as an input to business strategy. This drives an entirely different conversation. Instead of asking, 'what process should we automate?', customers are increasingly approaching automation imperatives from a data-driven perspective, beginning with the question 'what data do we need to support and help drive our business strategy?'. Having established that, the conversation quickly becomes about how best to easily automate collecting, processing, and visualizing that data. As you'd expect, we have an answer for that!"

Kim Technologies claim to offer their own 'third way' for buyers who want the price and implementation speed advantages associated with off-the-shelf software, but also the unification and customization benefits of a platform approach. Using artificial intelligence, they have created a configurable automation platform that allows multiple knowledge workers across an organization to automate their own processes, workflows, documents, and dashboards on a single unified platform - all from their own PC and with no coding or involvement from IT required.

It's certainly a bold pitch, but Daws offers an illustrative example of what this can look like in practice: "We were recently approached by a global corporation with an RFP to automate some critical compliance processes. At the eleventh hour, they approached us asking if we were able to do anything different than the half dozen respondents who were all coming in with 6+ month IT development projects and prices to match. One of our Implementation Consultants completed the project for them in an afternoon - no coding involved, live in sandbox, and ready to be tested!"

As big-name firms look more and more to work with AI technologies, user-friendly automation solutions will be vital to the transformation of knowledge work. What that work will look like decades from now ultimately remains to be seen.