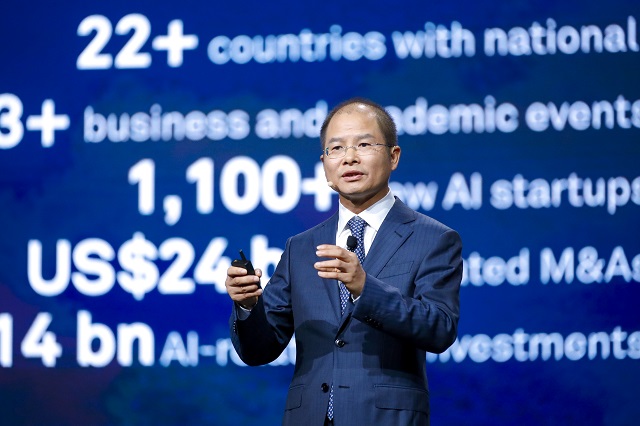 The chipsets, known as the Ascend 910 and Ascend 310 respectively, were announced as part of Huawei's larger AI strategy announcement today at the Huawei Connect conference in Shanghai. The Ascend 910 is designed for use in data centers, and promises to enable companies to process more data faster than Huawei's competitors - and, crucially, train neural networks in a matter of minutes. The Ascend 310, on the other hand, will be deployed in devices and smartphones connected to the Internet of Things.

The firm's cloud services business accounted for over 9% of Huawei's revenue in 2017 and has grown around 35 percent year-on-year since then. By offering this hardware alongside their pre-existing cloud services in what Rotating Chairman Eric Xu calls a 'full-stack, all-scenario AI portfolio', Huawei hope to further grow their enterprise business. This portfolio will bring together chips, a training and inference framework, and deployment scenarios for public / private clouds, edge computing, industrial IoT, and consumer devices.

Huawei have previously unveiled AI chips for use in their smartphones, namely the Kirin 970 and Kirin 980. While the Ascend series are not Huawei's first AI chipsets, the announcement is significant in that Huawei are clearly taking the fight to the main enterprise chipmakers such as Qualcomm and Nvidia. They're entering crowded territory, however; Google, Baidu, Apple, and ARM are just some of the companies producing dedicated neural network processing units.

"Going forward we need to think of new ways to prepare our business and industry for change. There are clear signs that AI will change or disrupt a whole host of industries," Huawei Chairman Eric Xu said. "AI will also change every organization. AI will change jobs and skills in a way ... that is quite different from previous revolutions," he added, predicting "there will be much less demand for jobs that handle repetitive tasks."