Created in the image: why robots need empathy
by Max Smolaks
8/29/2019 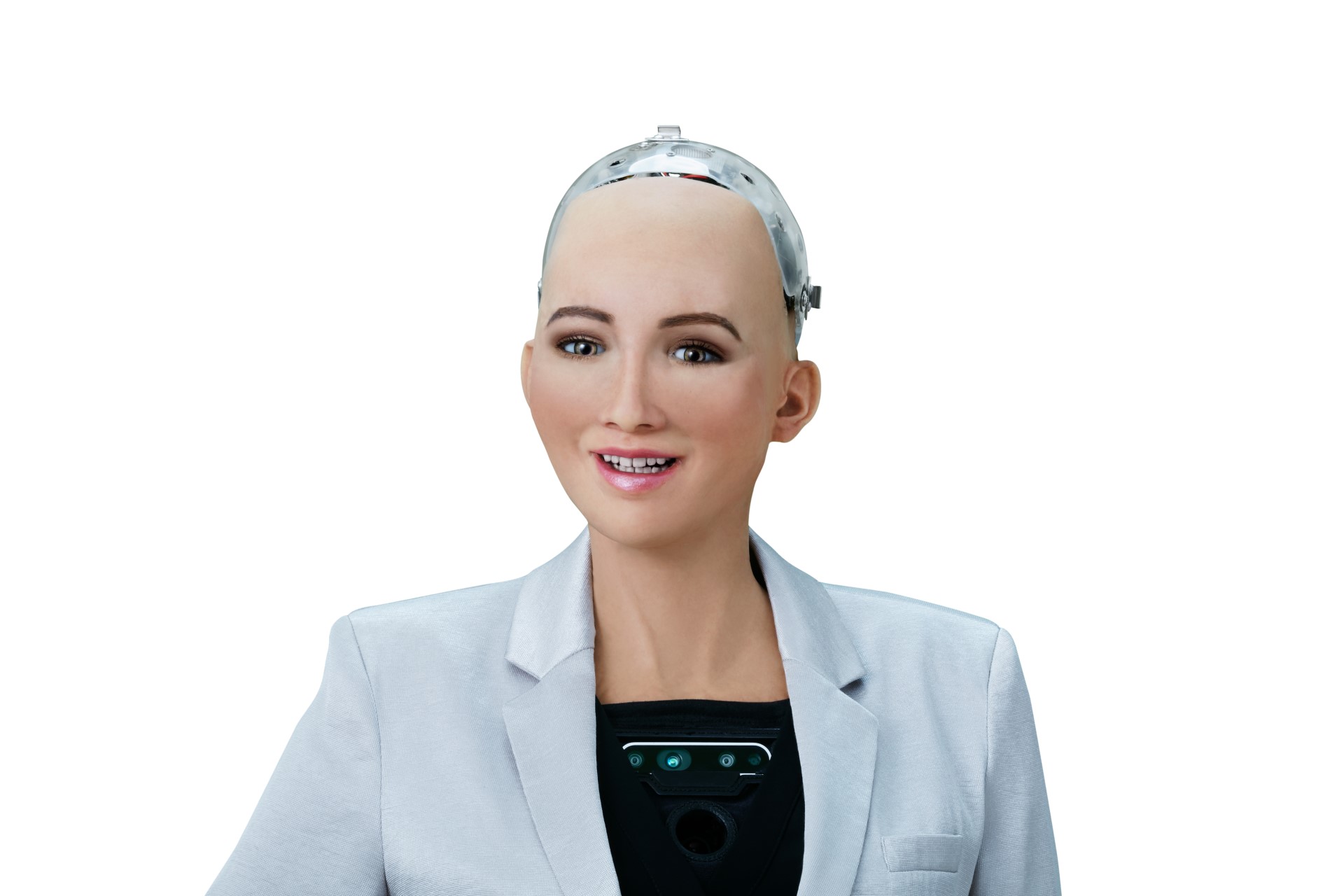 Dr. David Hanson spent two decades designing and building humanoid robots that can show and understand emotion. Popularly known as androids, such machines were originally proposed in the sci-fi books of the fifties and sixties.

You might have seen one of Hansons creations, Sophia, addressing the United Nations, chatting to the hosts of Good Morning Britain or Jimmy Fallon, or cavorting around SXSW. Sophia has met Cristiano Ronaldo, Chrissy Teigen, Angela Merkel and Will Smith. She attended our very own AI Summit in 2018.

Hanson believes that sooner or later, sentient
machines will live alongside humans  and his company, Hanson Robotics, is
doing everything it can to accelerate the process.

Jeanne Lim worked as a marketing executive at companies including Apple, Dell and Cisco, but accepted a job at Hanson Robotics after meeting its founder and buying into his vision of the future. Earlier this year, she succeeded him as CEO, freeing the inventor to focus on the creative aspects of the business. She hired Amit Kumar Pandey to take up the position of Chief Technology Officer and Chief Science Officer.

We are designing human-like robots so we
can connect better with them, build better relationships, based on trust and
shared values. We can secure a better future with robots  this is why I
joined, Lim told AI Business.

Life is not just about producing more, and
being more efficient, and reducing costs, right? Look at Disney  it became a
huge company by making people happy. Sure, its not a matter of life or death,
but its very important, Lim said.

When we talk about our mission, we say
that we want to create socially-intelligent AI to enrich our lives.

After years of social engagements, Sophia has
become a part of popular culture  with Lim often acting as her manager and
publicist. Creating a social robot is the main goal of the project, since it
helps collect better, more insightful data.

An example I often give is: Alexa knows
what kind of music you like, it knows when you want to play music. But it
doesnt know what moves you to like that music  it can be something in your
past, some sort of personal experience. If [a system] knows why, it can have
better predictive capabilities, and it can predict your preferences across
domains, Lim explained.

Thats what we think AI should do, go
beyond transactional knowledge, the superficial understanding of what we want
to do, and ask why we want to do it, in order to be more useful in the future.

To create an illusion of empathy, Sophia relies
on a whole host of AI technologies, including image recognition, depth
perception, natural language processing, intelligent motion control and others.
She walks, talks and displays a full range of realistic facial expressions. Her
face is covered with patented material called Frubber, designed to mimic human
skin, complete with pores and imperfections. The chassis is powered by
batteries, which means she can remain autonomous for days. It is no wonder
Sophia became the first robot to be granted citizenship - by the government of
Saudi Arabia, back in 2017.

Our crown jewel is the Hanson AI software
platform that powers Sophias intelligence, perception and personality. The
personality part is what a lot of people dont focus on, but we feel it
actually breathes life into her, Lim said.

We created a character bible for Sophia
that has her philosophical outlook, her psychological profile, her likes and
dislikes, how she talks.

Sophia is an evolving AI that is pretty
much going to live forever, so for her, the character bible is the story of her
life. The way we approach it is we hardcode her values; for example, we want
Sophia to represent AI for social good, and this cannot be taken away from her.
On top of that she has an evolving character that Hanson developed. She also
has a personality, sort of like DNA we get from our parents: she is very
curious, and a little bit sassy.

Its nature and nurture  and the nurture
part is mostly machine learning.

As part of the project, Hanson had to ask
important questions about what it means to be human  and it turned humor is a
very important part of human communication. For this reason, the company employs
not just coders and hardware engineers, but comedy writers too.

Comedy is important; she doesnt
understand humor, because she is an AI, but she is really trying, and her efforts
make it funnier. She tells really lame jokes, and shes got this lame laugh
thats not timed right, but its funny because shes trying her best to
replicate how humans behave.

Climbing
out of the uncanny valley

One of the major criticisms leveled at the utility
of humanoid robots is the concept of the Uncanny Valley, proposed by Japanese
robotics professor Masahiro Mori back in 1970.

The Valley has long served as a
hypothetical explanation for that uncomfortable feeling people sometimes get
when they see an object that closely resembles human beings: think creepy
Victorian dolls, or 3D animated films like The Polar Express or Beowulf.

Dr. Hanson has disputed the rationale behind the Uncanny Valley for years, and Lim follows suit: We always say that its a theory, not a universal truth. It was put forward by Masahiro 40 years ago, but so far, we have not seen scientific proof for this. It has actually been good for us, because nobody wants to compete in this space, she laughs.

Its about the design: if she [Sophia] is
designed well, and she comes across as having empathy, I think it makes a
difference.

When I first joined the company, maybe six
out of 10 people got scared when they approach Sophia. Now they see her, and
they try to kiss her, and we have to stop them. Maybe one in 20 people gets
scared.

This is my theory: its like you encountering a new culture or race; they look really different, dress really different, so you get scared. But if they become your roommate at college, and you hit it off with them, you have fun with them, they become a part of you  you know that they share your values. We feel that, when robots are more common, and are well-designed, we will get used to them like we get used to a different culture.

Sophia is one of many weird and wonderful androids made by Hanson Robotics. David Hanson has previously collaborated with the Korea Advanced Institute of Science and Technology to create Albert Hubo (left)  with the realistic head of Albert Einstein, and the body of a robot warrior.

He also built an android representation of sci-fi mastermind Phillip K Dick that analyzed the entirety of the authors work and could discuss his books, and successfully used Kickstarter to fund the development of Little Sophia, a robotic companion for kids that teaches STEM, coding, and the basics of AI.

More recently, Hanson decided to virtualize
Sophias brain and find a home for it in the cloud. The Virtual Robotic
Advanced Interactivity (VRAI) project, announced at the AI Summit in Hong Kong,
moves away from physical robots explored during the golden age of science
fiction, and closer to virtual constructs, or avatars, a common feature of the
more recent sci-fi genre of cyberpunk.

VRAI is a virtual character platform that enables developers and customers to deploy AI-powered beings on any device or screen. The AI engine is able to perceive and capture facial expressions, speech, eye movement, and tone of voice; it then analyzes them for meaning and emotion and uses a combination of all these expressions to create a response.

The aim of VRAI is to commercialize all the
work Hanson has been doing in software  the less visible, but arguably more
important part of Sophia.

We designed a human-like interface, but
Sophia is actually an AI character. She happens to be a robot first, and thats
why we unveiled this virtual form of Sophia at the AI Summit  because as an AI
character, she can live in any physical body, like a car, for example, Lim said.
She could live in a TV, on a mobile phone, in a browser. Sophia in a virtual
avatar format could go places where a physical robot might not be useful or
practical.

Lim was quick to point out this didnt mean
Hanson was giving up on hardware: It will take us a bit of time to complete
commercial versions of our robots, but with the virtual character, we are
already doing commercial proof-of-concept.

Sophia was announced as the future AI tutor for one of the biggest e-learning companies in China. She will teach English, as a teachers assistant, and has the potential to reach millions of people at once.

The problem with abandoning Sophias robotic
body is it negates many of the features that made her special. Without a physical
presence, she is in danger of being lost in the sea of chatbots  but according
to Lim, VRAI enables chatbots you actually want to interact with  and not just
to get answers.

Sophia was always designed as a conversationalist. Lets say youre a little bit of an introvert, a good listener, and you prefer the extrovert to take control of the conversation. Sophia knows that  if you dont respond quickly, she is going to take a little bit more control. If you keep asking her questions, she is going to answer you a bit more passively. This interplay is more reminiscent of the way humans communicate  human-to-human is not Q&A.

For all its popularity, Sophia was always a
research project. She can be credited with helping start a public discussion
about the role of humanoid robots - but thats not going to put anyones kids
through college. What Hanson Robotics is building now are products  easier to sell,
and hopefully even more useful to their customers.

The change of CEO in January - from a
disheveled visionary scientist to a soft-spoken pragmatist with tons of
commercial experience - seems to confirm this trajectory. But this doesnt mean
the company is feeling less excited about the future; Hanson Robotics continues
to believe that intelligent machines are coming. After listening to Lim, you
might start believing it too.