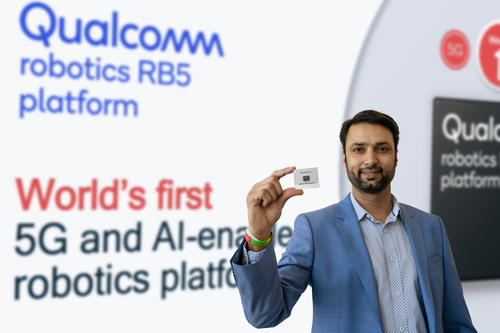 The Qualcomm Robotics RB5 is a set of hardware and software tools for developers and manufacturers that can be used to build power-efficient robots and drones for enterprise, industrial and professional service applications.

Come for the drones, stay for the ping-pong

The platform uses the Qualcomm QRB5165 SoC, a version of the Snapdragon chip found in smartphones, customized for robotics applications. It consists of the octa-core Qualcomm Kryo 858 CPU, and Adreno 650 GPU, along with multiple DSPs.

With a companion module, RB5 features both 4G and 5G connectivity.

"By applying its deep-rooted mobile systems expertise to the robotics industry, Qualcomm Technologies is helping to enable the creation of more powerful, secure, and intelligent robots than ever before," Dev Singh, Qualcomm’s head of autonomous robotics, drones, and intelligent machines, said.

"The new Qualcomm Robotics RB5 platform is a game-changer for drones and autonomous robotics, as its machine learning accelerators will allow adopters to replace manual inputs with AI," Lorenz Meier, Dronecode chairman, said.

South Korean tech giant LG said that it was evaluating RB5 “and plans to introduce next-generation robotic products based on the platform next year."

Also of note is FLIR, best known for its thermal cameras, with company VP Roger Wells claiming RB5 “will offer a critical advantage for our next-generation unmanned systems.” In 2019, FLIR acquired iRobot’s military and law enforcement robotics division for $385m.

Another company exploring military applications is ModalAI, with CEO Chad Sweet saying that the platform "will enable new autonomous drone experiences, such as navigating quickly through tight spaces while mapping the environment for objects of interest."

He added: We look forward to... integrating the Qualcomm Robotics RB5 platform to build off of our existing work with the Defense Innovation Unit to expand the capabilities of our sUAS [small unmanned aircraft systems] platforms."

Qualcomm’s partners have plenty of other target markets in mind besides the military – NXT Robotics is considering the platform for its security robots, AutoCore wants to win in the industrial machinery space, and Meituan hopes to deploy it in small delivery vehicles.