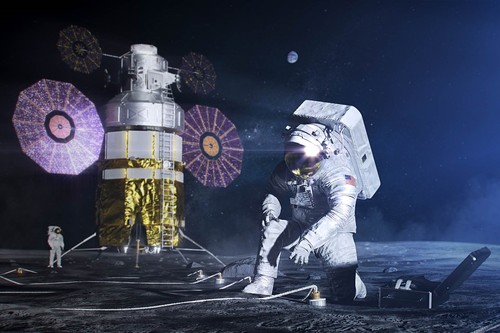 The next person to set foot on the Moon may be wearing something designed, in part, by artificial intelligence.

NASA’s next-generation spacesuit, developed for the 2024 Artemis mission, was created using generative design – where an AI model seeks to generate the optimal version of a part, based on specific requirements.

One small step for GAN, one giant leap for GANkind

The Extravehicular Mobility Unit (xEMU) is the first major upgrade to the NASA spacesuit in almost four decades, and has to balance safety with flexibility, as well as weight; it has to be easy to take on and off, and carry a number of special features.

Of particular importance is the portable life-support system that keeps the suit powered and oxygenated, maintains the right temperature, and supports communication with the outside world (or in this case, adjacent world). Balancing all this, and more, is a monumental task – so NASA brought in AI help.

Wired reports that the space agency teamed up with engineering firm Jacobs and software company PTC to bring the life-support system into the modern age.

PTC used several AI techniques, including generative adversarial networks, where two machine learning algorithms compete against each other for the best approach, and genetic algorithms, where competing algorithms create different designs, and then combine them using the best parts, establishing a new generation of designs, again and again, like in natural selection.

“The machine’s iterative process is 100 or 1,000 times more than we could do on our own, and it comes up with a solution that is ideally optimized within our constraints,” PTC’s technology VP Jesse Coors-Blankenship told the publication.

While most of the design is finalized, much can change over the next four years – but the hope is that the AI system would make any redesigns radically faster and more efficient.

Should the mission proceed as planned, Artemis III would mark the first time man has walked on the Moon since the Apollo 17 launch in 1972 – and the very first time for a woman to walk on the celestial body.

Huge challenges, both scientific and political, risk delaying or completely derailing the project – but it’s clear that whatever form the final Artemis program will take, it will rely significantly on artificial intelligence.

"AI is really being used all across the space exploration enterprise, everything from making the spacecraft smarter, to analyzing the huge datasets on the ground, and then to operating things like the huge communications antennas that we need to talk to the spacecraft," Steve Chien, head of AI for NASA’s Jet Propulsion Laboratory, told AI Business back in 2018.

But, he noted, humans will still play a part: “I believe that AI in space exploration is more complementary to human exploration. First of all, at least for the foreseeable future, we don't have an AI that would be as good as having the scientist involved, or having astronauts go and explore themselves.