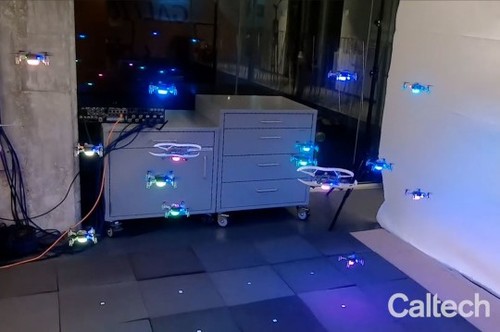 The GLAS algorithm helps each drone to think for itself

Researchers from the California Institute of Technology (Caltech) have created an algorithm that helps drone swarms navigate crowded, unmapped environments  a move that could prove critical in advancing the use of drones in delivery systems, search and rescue operations, and in self-driving vehicles.

Having multiple drones in a single space comes with two major challenges.

Firstly, as Caltech researchers explain in a blog post, Robots moving in new environments must make split-second decisions about their trajectories despite having incomplete data about their future path. Second, the presence of larger numbers of robots in an environment makes their interactions increasingly complex (and more prone to collisions).

Drones that think for themselves

The new algorithm, dubbed Global-to-Local Safe Autonomy Synthesis (or GLAS), works by giving each drone a level of autonomy that allows it to adapt to a changing environment.

Rather than leveraging existing maps, or the planned routes of other drones in the swarm, GLAS enables each machine to learn about its own space as it coordinates with others. This decentralized approach also means the computing involved is spread across numerous robots, so its easier to scale the swarm.

Additionally, the team has developed Neural Swarm  a swarm-tracking controller augmented to learn complex aerodynamic interactions in close-proximity flight. In tests, the researchers found that GLAS could outperform the current top-of-the-range multi-robot motion-planning algorithm by 20 percent across a range of cases. Meanwhile, tracking errors made by Neural Swarm were four times smaller than those of a commercial controller, predominantly because existing controllers are unable to consider aerodynamic interactions.

Scaling up the swarm

Professor of computing and mathematical sciences Yisong Yue, meanwhile, touched on the practical applications of the teams work: "These projects demonstrate the potential of integrating modern machine learning methods into multi-agent planning and control, and also reveal exciting new directions for machine-learning research.

Indeed, the team notes that the development could assist in search and rescue operations, allowing drones to move in packs, while its principles could also be applied to self-driving cars, helping reduce traffic jams and collisions. A similar algorithm could play an important role in the drone-based delivery ambitions of major tech companies such as Amazon and Alphabet. In any case, the research makes useful drone swarms an increasingly likely reality.