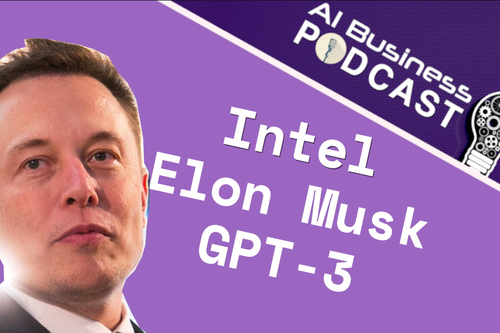 We’re taking pleasure in misfortunes of others

Welcome to another episode of the AI Business podcast, with your weekly dose of AI news and editorial chaos. This time, we’re discussing Intel’s technical difficulties, Elon Musk encroaching on our turf, and robot poetry.

We start with Intel, which is having problems with the 7nm process that are causing delays across its lineup and could put an end to a long tradition of self-reliance in silicon printing.

The company is trying to minimize the delay for its first ever GPUs – intended specifically for AI – by potentially partnering with a third-party fab. The success of such partnership would decide whether the world’s first true exascale supercomputer will be powered by silicon from Intel, or its arch-rival AMD.

That’s not to say Intel is in any actual danger – it will continue making money for a long time to come.

Elon Musk we don’t like, for a whole assortment of business-related reasons. Last week, the living legend made some dubious claims about AI – likely intended to drum up interest in his equally dubious startup Neuralink, a developer of brain-machine interfaces which has raised $158 million to date with nothing but a launch video and a white paper to show the public.

More generally, it’s good OPSEC to have an air gap around your brain – not everything has to be on the network.

Plus, here’s the story Tesla apparently doesn’t want you to see.

Finally, we tackle the expensive machine learning tech demo that is GPT-3. It is impressive, but is it useful? And is the output of the model that different from the poetry featured in The Policeman's Beard is Half-constructed, the First Book Written by a Computer, published back in 1984?