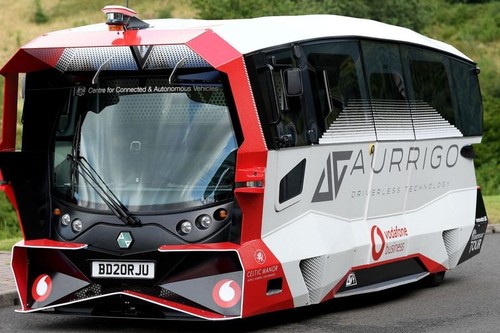 Driving usually plays a big part in determining who wins a professional golf tournament – but at last week’s ISPS Handa Wales Open, it was self-driving dominating the headlines.

Rather than the pros’ exploits off the tee, much attention was focused on an autonomous shuttle service that was ferrying players from the Twenty Ten clubhouse to the course at the world-famous Celtic Manor resort in Gwent.

The self-driving service, provided by Coventry-based Aurrigo, is believed to be the first of its kind to be used at a major sporting event, and has been carrying some of the world’s top professionals, as well as their caddies.

An inertial navigation system uses a computer, motion sensors and rotation sensors to guide the vehicle throughout the journey, while a LIDAR camera is used to create a 3D representation of the environment. A partnership with Vodafone provides 4G real-time data connectivity.

This data is monitored by the Aurrigo fleet management system, tracking the vehicles.

As has been the case with many professional sporting events across the world, the European Tour has been affected by Covid-19, and no fans are in attendance.

This has had implications for the driverless shuttle. Where normally it would carry up to 12 people, it has been redesigned specifically for the Wales Open, with three twin bench seats capable of accommodating a golfer and their caddie two meters apart.

The lack of a driver reduces the risk of transmission, and a touchless sanitizer unit is available on entering the vehicle.

The shuttle was expected to make more than 100 journeys over the course of the tournament; its deployment is the culmination of a two-year project following Aurrigo’s appointment as part of the Government’s CCAV Smart Cambridge’s T-CABS project to deliver Britain’s first autonomous bus route.

The shuttle is constructed from high-strength composite materials and uses a 96V lithium power pack coupled with a 22KW electric motor to deliver a potential range of 124 miles on a single charge.

David Keene, CEO of Aurrigo, commented: “This was such a big opportunity to showcase our technology in front of a global audience and we have come up with a Covid-19 secure autonomous vehicle that is a blueprint for other transport solutions.

“We believe it is the only EV shuttle of its kind that can be switched between operating autonomously or driven by an operator using a conventional steering wheel and pedals. This is a really exciting milestone for our business and this technology.”