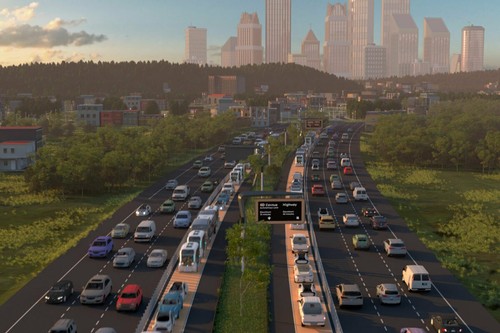 Starting with a 40-mile corridor between Detroit and Ann Arbor

Cavnue has an agreement with the state of Michigan to explore a corridor between Downtown Detroit and Ann Arbor, and is collaborating with all the major self-driving car companies.

The company is a subsidiary of Sidewalk Infrastructure Partners (SIP), a somewhat independent venture owned by Alphabet and the Ontario Teachers’ Pension Plan.

SIP works with Sidewalk Labs, which is wholly-owned by Alphabet, with the two companies sharing projects and knowledge.

“The future of roads”

The roads will be designed primarily for connected and autonomous vehicles, but also serve traditional transit vehicles, shared mobility, and freight and personal vehicles. Cavnue’s work seems to suggest that fully autonomous vehicles that can integrate into existing cities are still many years away.

During this feasibility analysis, the company plans to focus on technology testing and roadway design, exploring different financing models, with an aim toward determining project viability from both a technology and business perspective.

Alphabet owns one of the world’s most successful autonomous vehicle companies, but Cavnue is keen to stress it will remain vendor-neutral. The project will draw on an advisory committee of automotive and autonomous mobility companies, including Ford, GM, Argo AI, Arrival, BMW, Honda, Toyota, TuSimple, and Alphabet’s Waymo.

The Ford Motor Company and the University of Michigan will also operate as project partners.

“As a company focused on the future of infrastructure, we are thrilled to launch Cavnue to build the future of roads, and partner with Michigan and the communities along the corridor on a first-of-its-kind CAV corridor,” Jonathan Winer, co-founder and co-CEO of SIP, said.

Governor Gretchen Whitmer added: “The action we’re taking today is good for our families, our businesses, and our economy as a whole. Here in Michigan, the state that put the world on wheels, we are taking the initial steps to build the infrastructure to help us test and deploy the cars of the future.

“In Michigan, where the health of our workers and our economy are directly tied to the health of our auto industry, we will continue this innovative work to secure our state’s position as the automotive capital of the world.”

Back in 2017, Sidewalk Labs (not SIP) announced that it would partner with Waterfront Toronto to turn 12 acres of underutilized waterfront property known as Quayside into a sensor-packed smart city.

In a 1,500-page proposal published in 2019, Sidewalk promised to create “a neighborhood built from the Internet up," but the pitch was met with local opposition and criticism from regional media outlets, as well as the former co-CEO of RIM, Jim Balsillie, who used his significant wealth and connections to fight the company.

A leaked report revealed the partners had secret plans for a wider 350-acre development, which they had to walk back, with the government agency controlling the land ordering them to focus on their 12 acres.

Privacy campaigners questioned the idea of handing cities over to major corporations, but the project quietly carried on – until May 2020, when Sidewalk ended it, blaming the coronavirus.