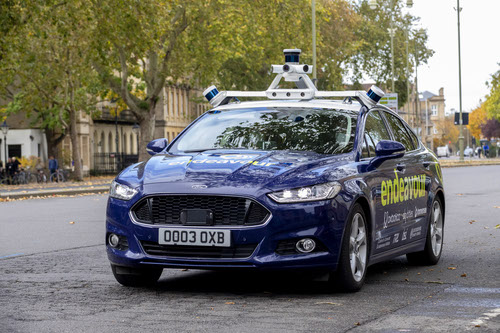 A fleet of six self-driving Ford Mondeos are undergoing live trials in Oxford this week as part of a UK Government-backed initiative.

Trips will be completed at all times of the day and night to allow the Mondeos to experience the widest range of traffic scenarios possible, and in a variety of different weather conditions.

“The first live on-road public trials mark a key landmark for Project Endeavour as we work with local authorities and members of the public in London, Oxford and other major UK cities to shape the future of mobility,” Dr Graeme Smith, SVP at Oxbotica and Project Endeavour consortium director, said.

Project Endeavour will run until Autumn 2021, with tests in Oxford, London – where two routes are planned – and one other major city. These trials will assess the cars’ autonomous performance in an array of different environments, and will also be used to develop engagement models with local authorities in preparation for the widespread roll-out of self-driving vehicles.

The project, which was launched in 2019, is backed by a consortium including Oxbotica, technology company DG Cities, and transport simulator firm Immense. Three new partners were added prior to the trials getting under way: the Transport Research Laboratory (TRL), the British Standards Institution (BSI) and Oxfordshire County Council.

Laura Peacock, Innovation Hub Manager at Oxfordshire County Council said: “The progress that has been made in the Connected Autonomous Vehicle (CAV) ecosystem is huge, moving from simulation, trials in isolated environments and now to the first live on-road public trials in Oxford.

“We are working with partners to create a systematic approach for other local authorities to engage and interact with CAV trials in their regions, which brings us much closer to CAV deployments becoming a reality.”

Camilla Fowler, head of automation at TRL, added: “These exciting trials, and what we learn about assuring safety and encouraging interoperability, will open up new opportunities for many more research demonstrations across the UK, which are the forerunners to the full-scale public trials so eagerly awaited.”

Project Endeavour is part-funded by the Center for Connected and Autonomous Vehicles (CCAV) delivered in partnership with Innovate UK. It is part of the government’s £100 million Intelligent Mobility Fund.