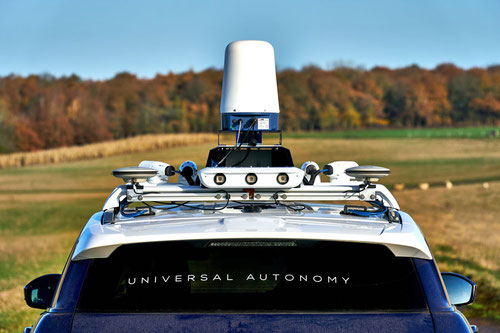 Oxbotica, the UK company which has established itself as a major player in autonomous vehicle software, has announced significant new funding.

The Oxford-based firm has raised $47 million (£34.7m) in a Series B round from a group of global partners that include BGF, bp ventures, safety equipment manufacturer Halma, HostPlus, IP Group, Tencent, Venture Science, and funds advised by Doxa Partners.

The money will be used to further develop Oxbotica’s autonomy software platform for industrial and off-road applications.

Oxbotica believes there is a significant opportunity in providing autonomous vehicle technology for industrial applications, and has prioritized this area for expansion above urban passenger transport.

Its software platform is promoted as delivering ‘Universal Autonomy’ – i.e. it works with any vehicle at any time and at any place. The platform provides low-energy, hardware-agnostic operation, being offered to businesses as a full stack or on a component by component basis.

A prime example of how it might be used is in the mining industry, where Oxbotica has agreed a tie-up with Canadian mining systems vendor Wenco, as AIBusiness reported last year.

The market for autonomous haulage trucks at surface mines is a lucrative one, with analysts predicting growth potential of 300 percent by 2023.

Oxbotica has developed at a rapid rate since its formation as an Oxford University spin-out in 2014. As well as deploying its software for industrial applications, it has used deepfake images to ‘teach’ autonomous cars, and participated in Project Endeavour, a trial of self-driving cars on public roads in the UK.

Ozgur Tohumcu, Oxbotica CEO, said: “This round of investment marks a key chapter in Oxbotica’s continued growth and pushes us forward in commercializing our autonomous software today, through key strategic go-to-market partnerships. The high quality and global footprint of our investors cements our position as a leader in autonomy.”

Erin Hallock, managing partner at bp ventures, the investment division of British Petroleum, added: “We are delighted to invest in Oxbotica – we believe its software could accelerate the market for autonomous vehicles.

“Helping to accelerate the global revolution in mobility is at the heart of bp’s strategy to become an integrated energy company.”