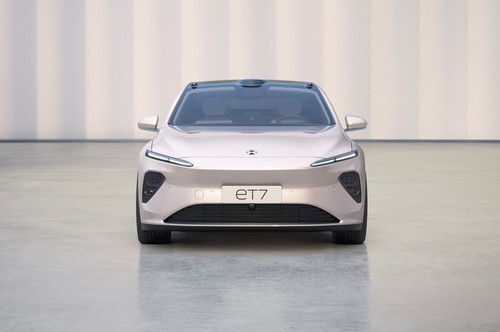 Luxury features at a reasonable price

Tesla has enjoyed success in the high-end electric car market for a long time, and a new generation of companies are emerging to contest its lead. The latest to take aim is Chinese brand NIO, which revealed the new ET7 electric saloon at an event in Chengdu last weekend.

The car is being billed as a competitor to Tesla’s Model S, and according to NIO, will ship with “full autonomous driving capability.”

The firm hasn’t revealed just when the ET7 will fulfill its self-driving potential, but we do know that it will come courtesy of a tie-up with Nvidia.

The US company has confirmed it will provide the car manufacturer with the Nvidia DRIVE Orin ‘system on a chip’ for use in its vehicles. The Orin-powered “supercomputer” – known as Adam – is set to appear in the ET7 within a couple of years.

Come at the king

Nvidia claims Orin is the world’s highest performance AV and robotics processor. The device delivers 254 trillions of operations (TOPS) per second, while also being able to scale down to entry-level ADAS (Advanced Driver Assistance Systems) and Level 2 autonomy.

Level 2 autonomous systems are classed as those that provide braking and acceleration support, plus lane centering and adaptive cruise control. But the driver at the wheel must be in control and constantly supervising the autonomous functions.

Of course, the ET7 will be capable of much more than that, using no less than four Orin SoCs to achieve an industry-leading performance of 1,000-plus TOPS, ensuring safe autonomous operation.

It is unclear what the autonomous capability of the ET7 will be at launch, but William Li, founder, chairman and CEO of NIO, expressed his excitement at the prospect: “The cooperation of NIO and Nvidia will accelerate the development of autonomous driving on smart vehicles.” The model will also make use of NOMI, NIO’s own in-car personal assistant.

The ET7 will come with a choice of three battery sizes – 70kWh, 100kWh and 150kWh, with the largest providing a potential range of 620 miles. Performance claims are impressive: an electric motor on each axle gives a combined output of 644bhp and 0-62mph in 3.9 seconds.

The price for ET7 starts at ¥448,000 (just over £50,000) in China and although European sales are yet to be confirmed, they seem inevitable as the car has been engineered to pass Euro NCAP crash tests.