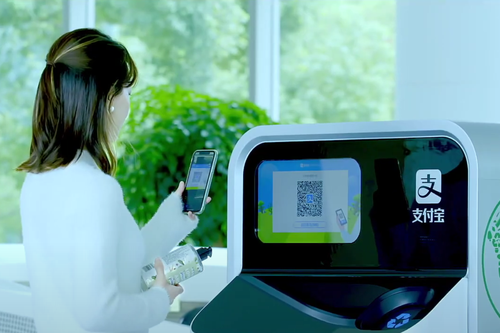 The systems are using AI to identify and sort plastic material

The program, called Waste Free World, is designed to accelerate the return of high grade plastic back into the materials supply chain, and help Unilever achieve its goal of halving the use of virgin plastic in its packaging by 2025.

The initiative kicked off with the installation of 20 recycling machines in offices and community spaces throughout two of China’s largest cities, Shanghai and Hangzhou.

Over the course of the year, 500 machines will be deployed throughout the two cities, with the view to collecting up to 500 tonnes of plastic.

To take part, users scan a bottle’s QR code using Alibaba’s Alipay app, and deposit the item into the machine. It then uses AI to identify the type of plastic and sort it accordingly. The material is fast-tracked to recycling centers, where it can be reused in future Unilever products.

QR codes are used to incentivize the return of plastic bottles by awarding users with Unilever coupons and green energy points which can be ‘spent’ on planting trees or protecting conservation areas. Alipay’s Ant Forest program and its NGO partners have helped plant more than 200 million trees in arid areas of China since 2016.

Unilever hopes the initiative could act as a blueprint for future recycling schemes in Asia. “We believe our campaign ‘Waste Free World’ will become the ‘green engine’ of the circular economy for plastic packaging in China,” said Rohit Jawa, executive vice president for Unilever North Asia.

Certainly, bold action has been needed on Unilever’s part – in 2020, non-profit organization Break Free From Plastic identified the conglomerate as one of the five most culpable plastic polluters in the world for the second year in a row.

Large businesses are increasingly looking to technology to mitigate their environmental impact, and AI is set to play a major role here, particularly in recycling. According to the Environmental Protection Agency, smart waste-sorting systems are on track to become a $12.6 billion industry by 2024.