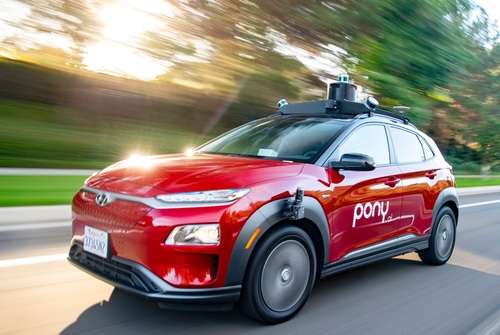 Autonomous vehicle startup Pony.ai has raised a further $100 million in an extension of its Series C funding round, bringing the company’s total raised to more than $1 billion at a post-money valuation of $5.3 billion – up from $3 billion in February 2020.

The company was founded in 2016 by Baidu’s former chief architect James Peng and engineer Tiancheng Lou, who had previously worked on Google X’s self-driving car project before it became Waymo.

The pair want to build level 4 autonomous cars – cars that can operate without human supervision – for predictable environments such as college campuses, small towns, and industrial parks.

Pony.ai has plans to deploy this tech within a few years, and is already making headway. Its full-stack hardware platform, PonyAlpha, is the foundation for the company’s autonomous truck and freight delivery solution, which has been undergoing testing since 2019. It is also one of the few companies to have secured an autonomous vehicle testing license in Beijing.

Closer to home, Pony.Ai has managed to obtain a robo-taxi operations permit from the California Public Utilities Commission, and last year launched its second public robo-taxi service in conjunction with Via and Hyundai, called BotRide. It had previously undertaken a pilot of the scheme in Nansha, China.

Pony.ai is facing stiff competition in the race to autonomous vehicles, but as VentureBeat reports, only a few are able to rival its fundraising efforts. Among the major players in the field, only Argo ($7.5 billion) and Waymo ($175 billion) tout higher valuations.

Pony.ai boasts a couple of other advantages – namely partnerships with Chinese state-owned auto-makers FAW and GAC Group, plus a collaboration with On Semiconductor, enabling it to prototype image sensing and processing technologies for machine vision.

Autonomous vehicles were firmly on the agenda long before COVID-19 arrived, and some analysts have suggested that the pandemic will help to hasten their development and deployment. Not only can such vehicles potentially minimize the spread of infectious diseases, but their role in a crisis situation is also noteworthy.

Pony.ai reported that its robo-taxi service delivered more than 15,000 food parcels and health kits throughout California during the coronavirus crisis.