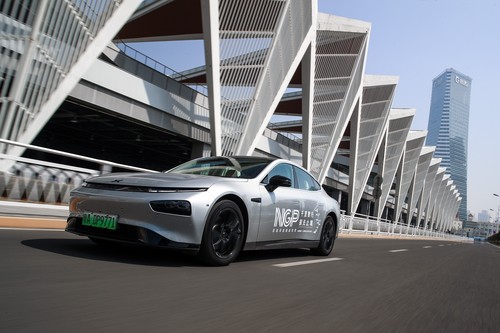 A marketing exercise on a scale not seen before

Chinese automotive newcomer XPeng is claiming a record for an eight-day autonomous driving adventure completed by a fleet of its electric P7 coupes on a route from Guangzhou to Beijing.

No less than 2,930km of the 3,600km (2,237 mi) journey was undertaken on highways under the control of the car’s Navigation Guided Pilot (NGP) – China’s longest-ever autonomous driving expedition by a mass-produced vehicle.

Another benchmark was the average of only 0.71 ‘human driver interactions’ per 100km, which according to XPeng, proves the reliability of the existing hardware.

Driving with press to impress

The feat illustrates China’s position as a major player in the fiercely competitive self-driving market.

The company’s chairman and CEO He Xiaopeng said, “The expedition has fully challenged the robustness of the NGP function.

“The results demonstrate that it is not only the strongest, but also the easiest to use autonomous driving function for production vehicles available in the market.

“We strive to become the world’s top autonomous driving hardware and software provider, and our strategy and R&D capabilities place us well in achieving this goal.”

A comprehensive set of data was compiled on the expedition, which featured participation by 228 auto journalists, EV enthusiasts, and industry experts.

Between 12 and 15 P7s participated on each day over a route that included 10 cities in six provinces along China’s scenic coastal corridor.

The route was specifically chosen to cover some of the most complex but representative road conditions and driving scenarios in China. Drivers faced a number of challenges, including mountainous terrain and heavy rainstorms.

Among the key functions that were monitored during the expedition were lane changing and overtaking (a 94.41% success rate), entering and exiting the highway (92.76%) and negotiating tunnels (94.95%).

The P7’s autonomous driving is enabled by a navigation-assisted system based on the route programmed by the driver, and is available on highways covered by high-precision maps in China.