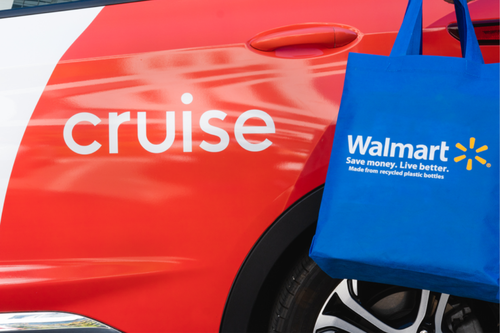 The pair previously worked on a delivery pilot project in Phoenix, Arizona. It was there that the retail said it was “impressed with [Cruise’s] differentiated business model, unique technology and unmatched driverless testing.”

Walmart revealed that it participated in Cruise’s latest investment round, which raised an extra $2.75 billion and took the company's valuation to more than $30 billion.

Walmart becomes the latest big name to have invested in Cruise, with General Motors (GM), Honda, and Microsoft all holding a stake in the firm. In mid-January, Cruise entered a long-term strategic partnership with Microsoft to use Azure cloud services to commercialize its autonomous vehicles at scale.

“Over the years we’ve been doing a lot to learn more about the role autonomous vehicles can play in retail, and we’ve seen enough to know it’s no longer a question of if they’ll be scaled, but when. The investment will aid our work toward developing a last-mile delivery ecosystem that's fast, low-cost, and scalable,” John Furner, CEO at Walmart US, said.

A week before, Cruise entered a partnership with the Dubai Roads & Transportation Authority to become the exclusive provider of autonomous vehicles in the city.

Walmart’s investment in Cruise comes as the company aims for all its vehicles to produce zero emissions, completely switching to renewable energy by 2035.

Dubbed ‘Project Gigaton’, the initiative hopes to eliminate one gigaton of greenhouse gas emissions from the company’s supply chains by 2030.

“Cruise is a natural partner to take collective action on climate change. It shows Walmart’s commitment to bring the benefit of self-driving cars to Walmart customers and business,” Furner said.