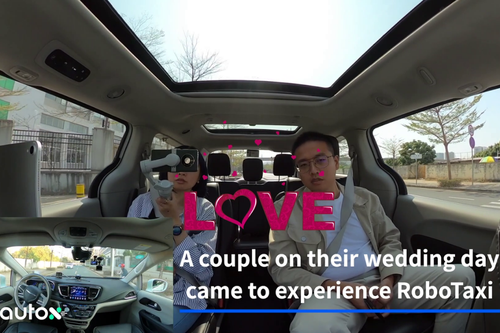 AutoX has celebrated 100 days since the launch of its commercial autonomous taxi service in Shenzhen, with the company describing it as being well-received by residents and local officials alike.

Launched in January, the fully driverless service won over a group of loyal users from the traditional ride-hailing market, AutoX said.

“The first 100 days have been a huge step forward for us and for the entire industry in China. We have learned so much from the feedback from our passengers about how to continuously improve our service to make the driverless journeys a fantastic experience,” Prof. Jianxiong Xiao, founder and CEO of AutoX, said.

Shenzhen, often called China’s Silicon Valley, is the country’s first and only city where fully driverless cars can operate on public roads.

Beijing, which hosted its first robotaxi service from Chinese technology giant Baidu earlier this week, only allows autonomous driverless vehicles to operate with a "backseat safety driver" present in the second row or co-driver seat, and vehicles may only drive within specific zones.

Baidu’s driverless taxis had a member of staff seated in the front passenger seat to deal with any emergencies, and only operated in and around the Winter Olympic Park in Shougang, in the west of the city.

To outpace Beijing even further, Shenzhen’s government said it will be passing legislation permitting Level 4 self-driving cars on its streets — the first city in China to do so.

“Our interactions with AutoX operations have been very positive. And this service also provides a great example for us to further polish the legislative framework for fully self-driving cars,” a Shenzhen official said.

The video shows how its cars drive near other vehicles as cyclists ride in the opposite direction, nudging around illegally parked vehicles and oversized trucks, and handling aggressive cut-ins by other drivers.

Changing lanes, driving on opposite lanes to bypass other vehicles, and avoiding motorcyclists are also shown.

In the video, the car takes 16 ride orders and passes many Shenzhen landmarks, including the headquarters of automotive company BYD, the research center of Evergrande Group, as well as parks, schools, hospitals, and construction sites.

The company said that following the successful launch, it will be looking to improve and expand the product, introducing new features and upgrading its sensor hardware system to include six high-resolution lidars and eight high-resolution 4D imaging radars.

AutoX launched a robotaxi service in Shanghai last August and was given permission to test driverless vehicles without a safety driver in California a month prior.

The company recently announced it would be partnering with Honda China to test driverless cars on public roads, with the pair hoping the collaboration will lead to the deployment of autonomous vehicles in China’s most densely populated cities.

AutoX’s success comes after American ride-hailing rival Lyft opted to get out of the autonomous market, selling its self-driving division to Toyota.