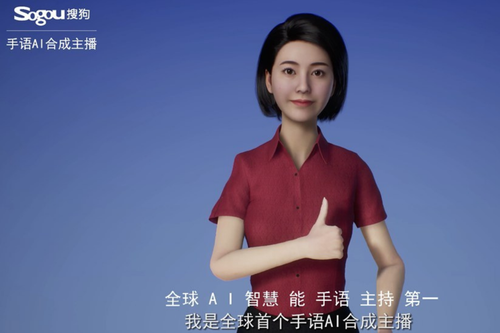 Dubbed Xiao Cong, the 3D avatar can be deployed in various settings away from the news, including special needs education.

"We are thrilled to bring the AI sign language news anchor to hearing-impaired viewers. And we hope to help them communicate better and get more engaged with the society through our technological innovations," Wang Xiaochuan, CEO of Sogou, said.

Sogou said that products and services for the 27 million hearing impaired in China have “long been lacking” due to high deployment costs.

The virtual news anchor is meant to “solve pain points of the hearing impaired who experience great inconvenience in interaction with the rest of the world.”

Xiao Cong is based on Sogou’s Vocational Avatar, which served as the foundation for virtual news anchors the company launched in 2019, in partnership with Zhangyue Technology and state media outlet Xinhua.

Sogou said Xiao Cong is an upgrade of its Vocational Avatar, stating that the latest addition “stands out with life-like digital effects, highly comprehensible and widely accepted mannerism of presenting the sign language.”

Sogou showed off its virtual avatar anchors at the Consumer Electronics Show (CES) in Las Vegas last year, promoting them as the first machine interpretation systems that could “see” and “think” in real-time as the presenter speaks.

The company’s latest AI avatar was revealed at the 2021 Sohu Tech 5G & AI Conference held in Beijing earlier this week (17 May).