Mayflower, the autonomous ship, forced to return to port due to mechanical issue
by Ben Wodecki
6/21/2021 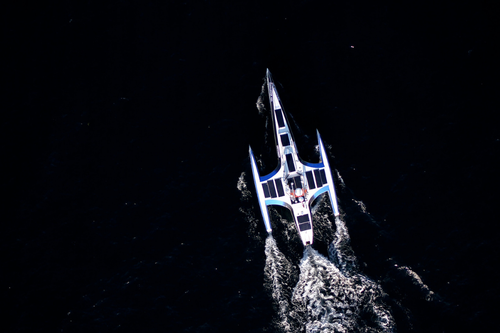 Still hopes to cross the Atlantic

The Mayflower Autonomous Ship (MAS), the ship heralded to “transform oceanography,” has returned to port shortly after beginning its long-awaited maiden voyage due to “a minor mechanical issue.”

The ship, which was built by nonprofit marine research organization ProMare and IBM, was meant to set sail from Plymouth in the UK to Cape Cod, Massachusetts – matching the 3,500-mile voyage taken by pilgrims in 1620.

The 50ft long, solar-powered, AI-guided trimaran suffered a mechanical issue on June 17 – two days after it departed. The ship was forced to turn around, with a support team sent to collect it.

The “AI Captain” of the ship said on Twitter that it was “in a bit of a pickle” but that it was safe with computer systems “working fine.”

The team behind the boat said the issue was related to a part “you'd find on any boat” and that due to the problem limiting the ship’s speed, turning about and coming back “was the prudent course of action.”

The MAS is set to go further than just matching the journey of the original ship; the Mayflower which carried pilgrim settlers to New England in 1620 was forced to turn back twice due to a leaking problem affecting its sister ship, the Speedwell.

The autonomous ship was expected to set sail for Cape Cod in September last year , marking four centuries since its namesake made the crossing – but the pandemic scuppered those plans.

The voyage to the US was projected to take about three weeks, a considerably shorter amount of time than the two months it took for pilgrim passengers to cross the Atlantic.

Should the MAS eventually make it across, it’ll be the largest autonomous vessel to cross the world's second-largest ocean.

The boat itself uses six AI-powered cameras and a suite of sensors to avoid potential hazards. It’s designed to be operated without humans, although operators can send messages to the boat.

The vessel’s ‘brain’ was created by Marine AI, to choose the path it travels to its destination, although engineers dock the boat remotely once it approaches land.

The purpose of the autonomous voyage is to collect data on plastic pollution and animal conservation, as well as proving the possibility of crossing seas without humans aboard.

The aluminum-built boat is capable of eight knots (10 mph) and is fitted with an electric “tongue” that “tastes” the ocean’s chemistry, collecting information on organic material and microplastic contamination.

The MAS also houses microphones to pick up whale songs.

ProMare invested around $1 million into the project at the outset, with IBM and others donating equipment and other services.

"We could probably just go ahead and plod along, but we're running into the Gulf Stream, we're running into a couple of storms. Ordinarily, that wouldn't be a big deal. But if you don't have enough power to keep the boat going through wind currents and waves, we might've been stuck out there for a very long time," Brett Phaneuf, co-founder of ProMare and co-director of the MAS project, told the Washington Post.

Intel and Rolls Royce are also looking to enter the fray, with the pair announcing in late 2018 that they would collaborate on designs for commercial autonomous ships.

A Rolls Royce document details a plan to launch a remote-controlled unmanned coastal vessel by 2025 and have an autonomous unmanned ocean-going ship by 2035.