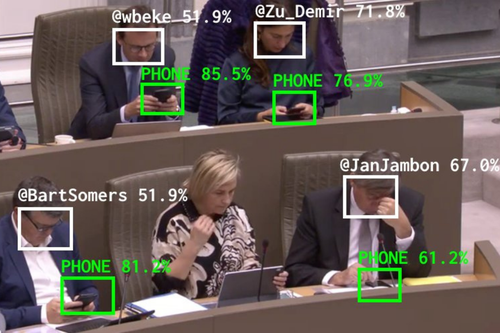 A Belgian artist has created a facial recognition system that calls out Flemish politicians who spend time on their phones when parliament is in session.

The Flemish Scrollers, built by Dries Depoorter, monitors daily parliamentary live streams via YouTube and assesses the length of time each member spends looking at their phone instead of watching the meeting in progress.

The software is written in Python and uses ML to detect phones, and facial recognition to identify the politician.

Once a live stream starts, the software begins scanning for phones, attempting to identify distracted members of the Flemish parliament.

The artist’s system then tags individual politicians on social media and politely asks them to “stay focused.”

At the time of writing, the system had already called out six politicians – including Jambon himself earlier this week.

If no live meetings are taking place, the software instead checks older uploads on the Flemish Parliament YouTube channel.

Depoorter said the project aims "to illustrate the dangers of current technologies. I leave the audience free to interpret them.”

Unfortunately, the bot cannot identify what the politicians are looking at – Flemish parliamentarian Maurits Vande Reyde hit back against the system on Twitter, saying he used his tablets and laptops to look up information during debates, and to make notes.

“We are 2021, you work better with communication tools,” Vande Reyde said via Twitter.