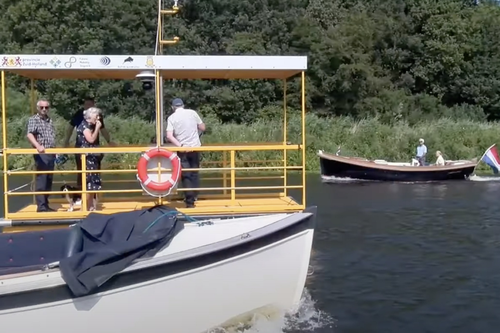 Dubbed Vaar met Ferry, the service began on the waterways of Teylingen, a municipality in the western Netherlands.

Subsidized by the Dutch provincial government, the autonomous ferries were developed by the US autonomous navigation startup Buffalo Automation and Future Mobility Network, the European alternative transportation operator.

The ferry service offers cost-free rides to residents from the Leiderdorp area until October 2021, with bicyclists and pedestrians able to access the Koudenhoorn island, a popular tourist and recreational destination.

“This is how we hope for a better spread of visitors, and we will ensure that recreants can also be safe this summer enjoy this beautiful area,” said Anne Koning, provincial executive of South Holland.

Buffalo Automation was founded in 2015 in Buffalo, New York. Its CEO Thiru Vikram also serves as a combat engineer in the US Army’s 411th Engineer Brigade.

Trials of its Greycraft self-driving water taxi were due to take place in Plymouth, the UK, last summer, but were postponed due to the COVID-19 pandemic.

Buffalo Automation’s autonomous watertaxis are solar and battery-powered, with the AI-based navigation system capable of running for six hours and enable speeds up to four knots (4.6 mph).

The watertaxi services aren’t currently available in the US – Greycraft has been tested on the waters of East Tennessee but is currently awaiting approval for a commercial deployment.

As part of its Dutch waterway project, the startup working with the Future Mobility Network. The consultancy is currently involved in several other projects, including a digital twin of the city of Utrecht, and smart delivery robots for use on the Breda University of Applied Sciences campus.

FMN is working on another self-driving taxi service in Holland – it’s conducting a feasibility study on whether an autonomous shuttle can connect the Roosendaal Leisure Park with a local designer outlet.

The AutoMate system was made available to consumers via an ADAS version called Pegasus in 2019, which was designed to be deployed in smaller recreational boats.

Ferry riders can use the company’s Mayday app to access the service. Users can point their phones at their surroundings, and Mayday will identify objects in view.