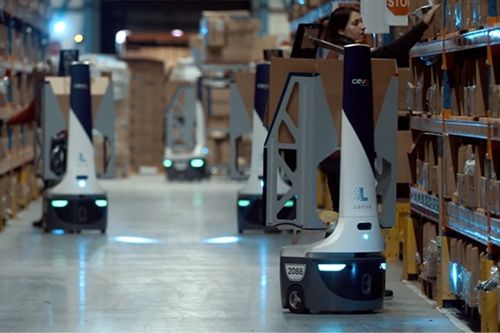 Locus Robotics said the newly secured funding will help it to “more effectively meet the needs of its growing customer and partner ecosystem.”

“At a time of increasing volumes and ongoing labor shortages, this new round of funding underscores how critical flexible, scalable, intelligent robotics automation has become to the warehouse and the supply chain,” said Rick Faulk, CEO of Locus.

“The problems over there are the same as in North America. It's all about labor. No one can find enough labor to actually ship what's been sold,” he said.

Locus’s bots are equipped with a tablet interface that enables them to ‘speak’ 21 different languages – a useful addition for an industry with a high proportion of migrant workers.

Locus has gone on to achieve unicorn status – raising $150m in a Series E round back in February. Tiger Global led that round, joined by Bond, Scale Venture Partners, and Prologis Ventures, the venture capital arm of logistics real estate vendor Prologis.

Tiger Global has invested in several companies that have gone on to do big things – including TikTok parent firm ByteDance, Peloton, and Chinese ride-hailing firm DiDi.

Mobile computing and supply chain company Zebra Technologies picked up a stake in Locus last year, and purchased the entirety of its rival Fetch Robotics for $290m in July.

The likes of Locus, Zebra, and Fetch are looking to compete with Amazon, which acquired robotics firm Kiva for $775 million back in 2012.

At the time, Kiva was the leader in the budding warehouse automation market, working with major retailers including Walgreens and Staples.

After Amazon tookover, however, those partnerships ended, leaving rivals unable to compete.