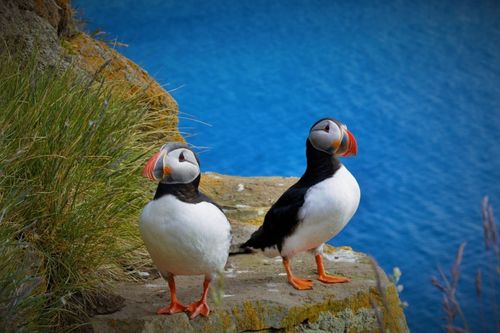 Microsoft has teamed up with energy firm SSE, tech firm Avanade, and NatureScot to use AI to monitor puffin numbers around the Scottish coastline.

The quartet launched the ‘Flying Squad’ initiative – testing the system during the seabird’s breeding season on the Isle of May in the Firth of Forth.

Should the initiative prove successful, the technology will be further deployed around SSE hydropower stations and wind farms.

“The implications for the Microsoft/Avanade technology are huge,” said James Scobie from the Flying Squad.

“It’s our ultimate aspiration that this incredible cutting-edge technology could be deployed in a variety of different settings to monitor species of interest in the future."

Much ado about Puffin

Puffins were classed as a vulnerable animal by the International Union for Conservation of Nature in 2015 – with a 2018 survey suggesting numbers in certain areas of northern Britain have declined by as much as 42 percent in five years.

The UK is home to the – Fratercula arctica – the Atlantic puffin, with around 580,000 pairs living on its Northern coastlines, according to Countryfile.

To monitor the birds, the organizations positioned four cameras around the Isle of May, which were then left to gather footage. The cameras automatically detected and counted the birds until they left the island.

“The innovative puffin monitoring project on the Isle demonstrates the impact technology can have on advancing sustainability and is just one initial example of how we are collaborating with SSE to shape a more sustainable future,” said Clare Barclay, CEO at Microsoft UK.

The Flying Squad initiative comes shortly after SSE and Microsoft signed a memorandum of understanding to jointly develop and deploy zero-carbon innovation projects.

Maybe just get rid of the rats?

UK Puffin numbers could receive a huge boost – as researchers found that after eliminating rats, the birds were able to thrive. Rodents were found to eat the bird’s eggs and chicks.

Following the removal of rats on Lundy Island in Devon, seabird numbers tripled to more than 21,000, according to a study led by the Royal Society for the Protection of Birds (RSPB).

“We were really concerned as previous records showed that puffin numbers on Lundy had plummeted from over 3,500 pairs in 1939 to fewer than 10 pairs in 2000,” Rosie Hails, director of Science & Nature at the National Trust, said in 2019.