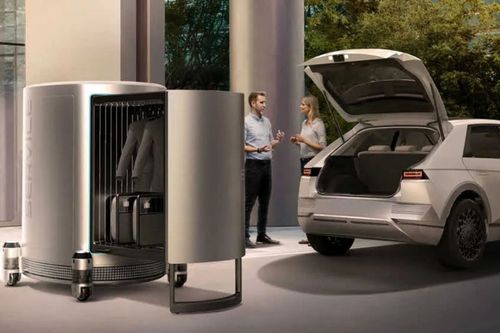 Hyundai Motor Group set out its vision of robots that expand humanity’s grasp for both work and leisure at CES 2022 Tuesday.

The biggest product update came with the preview of Hyundai's Plug-in-Drive concept. Housed in a cylindrical form factor with just a single wheel for transport, the PND looks like the base of moveable furniture.

And that's exactly what the PND is designed for, except its robotic operating system can hypothetically carry any inanimate object. A trailer video showed whole office plans automatically transforming as desks shifted around by themselves, each carried by multiple PND units.

Hyundai teased the manifold possibilities of its modular design. Short films imagined autonomous buses containing free-roaming personal pods that detach and take the passenger directly to their front door. A roving trauma center formed from PND-driven ambulances to treat patients at disaster sites was another highlight.

Hyundai regards robots as complementary to its core mobility business and believes there’s a virtuous cycle that will accelerate innovation in both areas. It calls this vision “Metamobility,” harking back to the Metaverse ideal.

This Metaverse vision of expansive and persistent virtual worlds is the industry Zeitgeist at CES this year. But Hyundai offered a fresh take by weaving robotics into the concept. It aims to build robots that are companions to people and their physical viaduct into the virtual sphere.

“Robotics will create a horizontal connection across our business areas and create new business systems that we call the unlimited mobility of things,” said Chung Eui-sun, chairman of Hyundai Motor Group. “Like the metaverse, it builds a bridge between the physical world and new virtual realities."

Rather than replacing the car with robotics and mobility, Hyundai sought to portray the concept as evolutionary. Cars were now smart, living environments that would in the future feature intelligent axis and form part of mobility-as-a-service, said Chang-Hyeon Song, president and head of the company’s transportation-as-a-service unit.

That same mobility through robotics is fuelling MaaS in the smart factory, Song added. A discussion followed about connecting the smart factory into the Metaverse, as Song joined Ulrich Homann, Microsoft’s corporate vice president for cloud, and Marc Raibert, the chair of Hyundai-owned robot producer Boston Dynamics.

“We’re not just looking at a camera view of the factory floor, for example, we’re going to sit there and be part on the floor working with the workers, and the robots and the machines to do the work while we might be in the U.S., or Korea, or wherever we might be,” Homann said.

This droid has a pet-like demeanor of its own, and can seamlessly navigate indoors and outside. It's dexterous enough to lift and carry fragile objects.

“Hyundai and Boston Dynamics both envisage the future in which robots and people work together to improve the safety of productivity and broadly improve the quality of life,” said Raibert. “In order to achieve that vision of companion robots we’re going to need to achieve athletic intelligence, the ability to balance, to climb stairs and to move in any kind of terrain.”