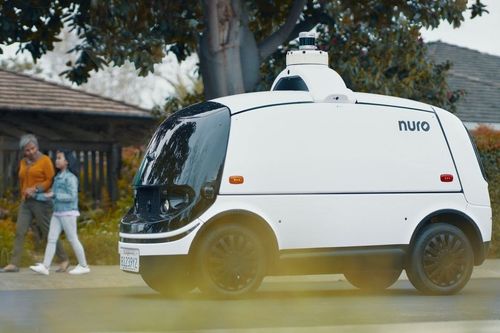 The third-generation vehicle boasts twice the cargo volume of the previous model as well as new temperature-controlled compartments.

The new R3 model uses 100% renewable energy, with the California-based firm pledging to release a sustainability report to detail actions the company has taken toward sustainability.

The delivery vehicle also has a suite of safety features, including external airbags for pedestrians outside the vehicle and a multi-modal sensing suite consisting of lidar sensors, cameras and radar to detail its surroundings.

“With the introduction of our new flagship model we are excited about the opportunity to fulfill our vision of improving everyday life through autonomous delivery at scale,” said Dave Ferguson, co-founder and president of Nuro.

The new Nuro model will be produced in a supplier partnership with BYD North America and completed at the company’s new $40 million manufacturing facility in Nevada.

The facility also houses a closed-course test track, with Ferguson describing the new production site as “ground-breaking” and “one of the industry’s first end-of-line manufacturing facilities in America.”

The site will test tens of thousands of delivery vehicles per year, according to Nuro, to ensure they are ready for deployment. The Nevada facilities are not yet operational, with Nuro expecting the site to be functioning later this year.

The North American branch of BYD, the Chinese manufacturing giant, will assemble hardware components for the vehicle platforms, while Nuro will complete the final steps of manufacturing and make the autonomous vehicles ready for deployment.

“As one of the world’s leading electric vehicle manufacturers and a turnkey solution provider, BYD will leverage the manufacturing capacity of its Lancaster facility to support Nuro and bring more jobs to California,” said Stella Li, executive vice president of BYD and president of BYD Motors.

In addition to unveiling its new model, Nuro announced expansions to its strategic partnerships.

It now enjoys multi-year commitments with FedEx, as well as Kroger and Chipotle as investor partners.

Last year, Nuro closed a $600 million funding round, led by Tiger Global Management. Google, SoftBank Vision Fund 1 and Kroger were investors in that round.

To date, Nuro is the only company to receive an exemption from the Department of Motor Vehicles to deploy autonomous vehicles on American roads, although it can only transport cargo and not passengers.