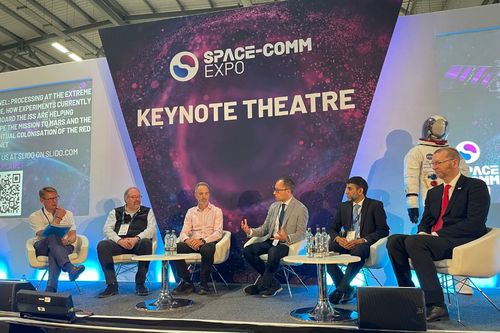 The dream of humans on Mars will require a data infrastructure capable of handling harsh conditions on the red planet, according to speakers at Space Comm 2022.

During a panel discussion, Ben Bennett, director for HPC and AI strategic programs at HPE, said that a growing number of private companies are interested in mining the fourth planet from the sun due to potentially trillions of dollars’ worth of rare Earth metals in meteors.

But while the potential for profit is great, so too would be the computational needs to conduct such an operation, Bennett said. This calls for data centers to be built on Mars.

However, powering a Mars-based data infrastructure would require a "diversified power grid,” said fellow panelist Richard Ambrosi, executive director of Space Park Leicester. Moreover, "whether it's solar, different storage technologies, nuclear, everything about Mars will equally be a challenge around surviving on the surface.”

Bennett also pointed to another challenge: Mars has a sizably longer lag time than the Moon and computational power would be needed to relay that data not only on the planet but also back to Earth efficiently.

“The time from Mars to Earth fluctuates somewhere between three and 21 minutes and so a round trip communication is between six to 42 minutes. Imagine something like Apollo 13, but it would take Houston an hour to know that worst case, there's been a problem on Mars,” Bennett said.

The team at HPE is currently involved in experiments aboard the International Space Station to test whether space exploration teams can do without what Bennett described as the "umbilical" for communicating with Earth.

Nevertheless, even though the computational needs for those hoping to mine on or adjacent to Mars would be daunting and cost somewhere in the billions, Bennett said the payoff could be worth it.

While Bennett stressed the need for large computational power to function manned missions to Mars, Chris Hall from the U.K. Space Agency said the Mars Rover has a maximum bandwidth of just two megabits.

“We need to do something about that,” Hall said, agreeing that by getting processing at the edge on Mars it is “going to make it much easier to communicate back and forth.”

Hall, who serves as the applications delivery lead, added that there isn’t too much in the way of edge deployments in the space sector, largely due to costs. But prices are coming down and “continuing to fall,” he said.