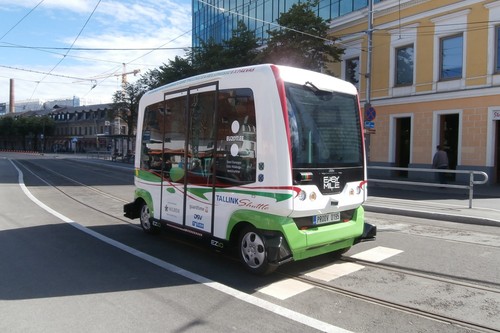 Nobody was hurt – but nobody knew how to proceed either

What happens when an autonomous vehicle collides with a car that has a driver at the wheel? Confusion, if events in Estonia this week are anything to go by.

One of the self-driving buses that have been operational on the streets of Tallinn, the nation’s capital, since last year, collided with a Skoda Octavia at an intersection.

No one was injured, but it was the aftermath of the incident that shed light into some of the issues that will have to be resolved across the world as AI-powered vehicles become more common in our major cities.

Firstly, there is the question of educating people on what to do in the immediate aftermath of such a collision. In Tallinn, it was the driver of the Skoda who called the police, unsure of what the correct procedure should be. The operator of the self-driving bus was similarly not clear.

The local transport authority then faced questions from the media over how it should regulate driverless vehicles, and what it could do to try to avoid similar incidents in future.

An examination of the bus was carried out and although the preliminary check revealed no damage to its sensors, a more thorough examination of all the key systems is due to be conducted. Any significant damage could have major implications on how Estonia’s driverless vehicles operate in the future.

The question of insurance was also raised. According to local media, the bus operator’s insurer said it does not matter that the bus had no driver, as it had been deemed fit for the road.

It also said that in a collision of this nature, if it was clear who was to blame – and there was no disagreement between the parties – then compensation could be paid out regardless of the fact that one of the vehicles had no driver.

But the lack of precedent has brought into focus some of the practicalities and bureaucratic requirements that driverless traffic will necessitate in future.

Comprehensive rules for the use of driverless vehicles are yet to be put in place by Estonia’s Ministry of Justice, which raises some questions as to the wisdom of having autonomous vehicles operational on public roads.

A group of AI experts are currently working alongside the government to develop guidelines for the safe use of AI in Estonia.

What’s clear is that as the tech continues to develop, there is a lot of work still to be done in terms of educating the public, media and businesses about best approach to autonomous systems.