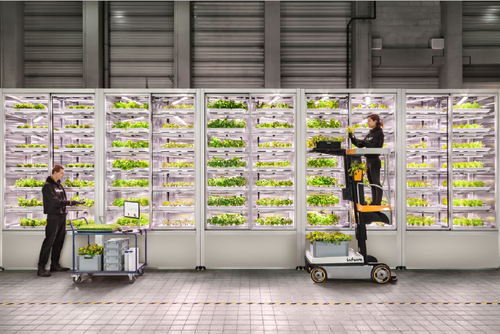 Investors prove they have an appetite for AI-led farming

Vertical farming startup Infarm has raised $170 million in a Series C round.

Unlike most of its vertical farming rivals focused on building huge warehouses, Infarm also operates smaller modular systems that can be placed inside retail locations, so the plants can continue to grow at the point of sale.

The round was led by LGT Lightstone, and brings the company's total funding raised since 2013 to $300m.

From vertical farm to hash table

The system gathers more than 50,000 data points through a plant’s lifetime, using a mixture of Internet of Things devices, big data analytics, and cloud processing to optimize growth.

Infarm plans to expand its area under cultivation to five million square feet by 2025, ten times the 500,000 square feet it currently runs across 10 countries. At the moment, it grows a variety of salads and herbs, but expects to add mushrooms, tomatoes, and strawberries to its crop over the next five years.

Every month, the company harvest more than 500,000 plants, and Infarm claims that it uses 99.5 percent less space than soil-based agriculture, 95 percent less water, 90 percent less transport, and zero chemical pesticides. Currently, around 90 percent of the electricity it uses comes from renewable sources, but the company hopes to bring that up to 100 percent by 2021.

"The coronavirus pandemic has put a global spotlight on the urgent agricultural and ecological challenges of our time,” said Erez Galonska, co-founder and CEO of Infarm.

“This investment will help us make a truly global impact through our network, preserving the thousands of acres of land, millions of liters of water, and ultimately change the way people grow, eat and think about food."

"With over $1bn of customer demand, partnerships with 17 of the top 50 global grocers, Infarm is set to revolutionize the market behind a unique ‘demand-led’ modular business model," said Dharmash Mistry, partner at LGT Lightstone.

Jumping into the fray is UK-based online supermarket Ocado, which said this summer it would invest $21.7m in developing indoor farms in a joint venture with the US vertical farming specialist 80 Acres Farms, and Netherlands-based technology supplier Priva.

One of Infarm’s best-funded rivals is Plenty, which has raised around $400m from SoftBank, Jeff Bezos, and former Google CEO Eric Schmidt. Earlier this year, Bloomberg reported that the company was looking to raise another $100m at a $1bn valuation.