European Space Agency funds project to remove space debris, with AI on board by Louis Stone  11/4/2020 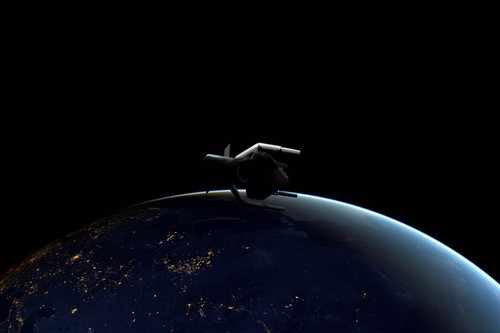 Had the two objects smashed into each other, 991 kilometers above Antarctica, they would have added thousands of pieces of space debris to the layer of junk orbiting the planet – continuously putting crucial satellite infrastructure at risk.

A new European Space Agency-backed project hopes to minimize such risks, with a trial hoping to capture debris in orbit, and drag it back down to Earth where it will burn up as it re-enters the atmosphere.

But for ClearSpace-1 to be a success, it will need the help of artificial intelligence.

In October 2019, the United States Space Surveillance Network was tracking around 20,000 artificial objects in orbit, including 2,218 operational satellites. Despite best efforts, occasional collisions do occur.

In 2009, a decommissioned Russian Kosmos-2251 plowed into an active Iridium 33 satellite, causing more than 2,000 pieces of debris to hurtle in all directions.

On top of the 20,000 objects monitored by the Space Surveillance Network, there are thought to be many more pieces of man-made debris too small to track – with the ESA estimating some 128 million objects greater than 1mm are orbiting the Earth.

Without atmospheric resistance, even small bits of debris can cause significant damage if they hit a satellite, or the International Space Station – which this week passed 20 years of human habitation. Three years after the Iridium collision, a chunk of the Kosmos-2251 satellite passed by the ISS at a distance of just 120m (390ft).

Should such an event happen, the concern is that it could cause a cascading series of impacts – as each collision leads to more debris that leads to more collisions. At an extreme, this Kessler syndrome could lead to the low Earth orbit becoming so polluted that space activities and satellite operations in some orbital ranges could become nearly impossible for hundreds of years.

Such fears have led to a small but growing number of projects aimed at cleaning up the space around the Earth. ClearSpace-1 is one such initiative, led by eponymous startup ClearSpace, a spin-off of Swiss university École polytechnique fédérale de Lausanne (EPFL).

In 2025, ClearSpace-1 hopes to recover the Vespa Upper Part, a payload adapter orbiting 660 kilometers above the Earth that was once part of the European Space Agency’s Vega rocket. Robotic arms would be used to capture Vespa, with ClearSpace-1 using onboard cameras to spot the junk and work out the angle of approach. With Vespa, a dark object spinning alone in space for the past seven years, that could prove an immensely complex task. So, the project hopes to simulate the maneuvers using artificial intelligence first.

“A central focus is to develop deep learning algorithms to reliably estimate the 6D pose (3 rotations and 3 translations) of the target from video-sequences even though images taken in space are difficult," lead scientist Mathieu Salzmann said. "They can be over- or under-exposed with many mirror-like surfaces."

To train the deep learning algorithms, "we are producing a database of synthetic images of the target object, including both the Earth backdrop reconstructed from hyperspectral satellite imagery, and a detailed 3D model of the Vespa upper stage," lab head Wenzel Jakob explained.

"These synthetic images are based on measurements of real-world material samples of aluminum and carbon fiber panels, acquired using our lab's goniophotometer. This is a large robotic device that spins around a test swatch to simultaneously illuminate and observe it from many different directions, providing us with a wealth of information about the material's appearance."

Once these systems are trained, the next challenge will be to make them run on the limited hardware set to be available on the ClearSpace-1. "Since motion in space is well behaved, the pose estimation algorithms can fill the gaps between recognitions spaced one second apart, alleviating the computational pressure," EPFL’s Embedded Systems Lab head Professor David Atienza said.

"However, to ensure that they can autonomously cope with all the uncertainties in the mission, the algorithms are so complex that their implementation requires squeezing out all the performance from the platform resources.”

Uncertainty is to be expected, but the team hopes to avoid a failure – especially as it could lead to more space debris.

Should the test prove successful, the ClearSpace project hopes to expand its ambitions to clean up space. Among the top targets is the Envisat system, once the world's largest civilian Earth observation satellite, which could lead to a huge cloud of debris if it hits an object as small as 10kg.