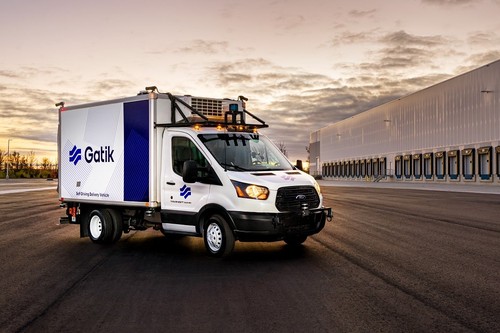 The Toronto-based company, which specialises in B2B short-haul middle-mile logistics, has raised $25 million in Series A funding.

It operates a fleet of vehicles seven days a week on routes up to 300 miles in multiple locations across the US and counts a number of Fortune 500 companies among its clients, including Walmart.

“Throughout the year we saw an increase of 30-35% in orders from our customer base, and we expect this trend to continue,” he said in a statement. “We will continue to bring autonomous delivery into the mainstream, driving substantial efficiencies in supply chain logistics for retailers across North America and beyond.”

A first for Canada

Indeed, this ambition is already being realized in Canada, where the company has just announced the country’s first autonomous delivery fleet in partnership with Loblaw, its largest food retailer.

Following the successful completion of a 10-month on-road pilot, Gatik will operate five vehicles for Loblaw on five different routes, between automated picking facilities and retail locations across the Greater Toronto Area. All vehicles will have a safety driver as a co-pilot, and the program is slated to start in January 2021.

“As more Canadians turn to online grocery shopping, we’ve looked at ways to make our supply chain more efficient. Middle-mile autonomous delivery is a great example,” said Lauren Steinberg, senior vice president of Loblaw Digital. “With this initial roll-out in Toronto, we are able to move goods from our automated picking facility multiple times a day to keep pace with PC Express online grocery orders in stores around the city.”

Launched in 2017, Gatik came out of stealth last summer and earlier this year unveiled its autonomous box truck, capable of transporting ambient, refrigerated and frozen products. The new funding brings the total raised so far by Gatik to $29.5 million. As autonomous delivery plays an increasing role in our on-demand economy, we can certainly expect to see that figure rise.