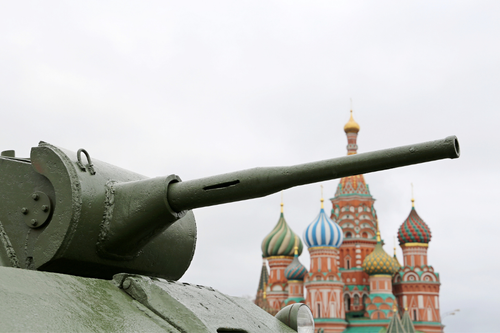 In the age of AI, the weapons of war have become more technologically advanced than at any time in history. Russia’s military, as its incursion into Ukraine continues, is no exception.

As far back as 2017, President Vladimir Putin had said that “whoever becomes the leader [in AI] will become the ruler of the world.”

Here is a snapshot of Russia’s AI arsenal, some of which are being used against Ukraine.

Like most militarized modern nations, Russia has fleets of drones.

Its KUB-BLA drone was developed by the Kalashnikov Group, the same company that produces Russia's iconic assault rifles. Designed to destroy remote ground targets, it delivers payloads onto a target’s coordinates that are set manually or in the image from the drone's guidance system.

Russia has deployed its drones in combat prior to its invasion of Ukraine. Its military has been intervening in the Syrian civil war at the request of the Syrian government for military aid against rebel groups.

Russia’s Khmeimim base houses its Syrian drone operations, as well as radar and surveillance equipment. It has been targeting militants in places like Idlib using ‘suicide drones’ – autonomously targeting UAVs (unmanned aerial vehicles).

Its KYB-UAV drones developed by ZALA Aero, a Kalashnikov subsidiary, self-destruct when striking its target. Russian Defence Ministry initially tested the drones in Syria in late December and planned to widen their use in 2022.

Russia’s army of today has formidable cyber capabilities, quite a jump from its World War II forces.

In the run-up to the invasion, Russia blitzed Ukraine with a plethora of cyberattacks – including DDoS (distributed denial-of-service) hits to paralyze government sites. The invading nation has also used data-wiping malware on hundreds of Ukrainian servers, according to the Associated Press.

“The Russian government has perpetrated cyberattacks against Ukraine,” U.S. Pres. Joe Biden said in a national address about the conflict. The hackers spread “outlandish and baseless claims” that Ukraine was about to invade Russia, prepared to use chemical weapons and committed genocide.

ESET Research Labs, a Slovakia-based cybersecurity firm, was among those monitoring the digital situation to have noticed the threats. Ukrainian government contractors in neighboring Latvia and Lithuania were hit with the malware, dubbed HermeticWiper, as were banks.

The lead-up to the invasion wasn’t the only time Russia hit Ukraine with cyberattacks. Since the annexation of Crimea, Russia has been accused of routinely targeting Ukrainian businesses and government outlets with cyberattacks. Notably, the NotPetya attack of 2017 caused billions of dollars in damage according to numerous reports.

To counter the cyber threat, Ukraine has asked the West for assistance in countering Russia’s hacking offensive. Yegor Aushev, the co-founder of a cybersecurity company in Kyiv, wrote forum posts requesting hacker aid at the behest of senior defense officials, according to Reuters.

The Anonymous collective is officially in cyber war against the Russian government. #Anonymous #Ukraine

In terms of autonomous weapons, Russia has deployed unmanned ground vehicles for tasks ranging from bomb disposal to anti-aircraft, and of course, killing.

Its Uran-9 UCGV (unmanned combat ground vehicle) was developed by JSC 766 UPTK, also part of the Kalashnikov group. It saw deployment on the ground in Syria was used in the large-scale Vostok drills in 2018. It is fitted with a 30mm 2A72 autocannon, as well as 4 × 9M120 Ataka anti-tank missiles and up to 12 Shmel-M thermobaric rocket launchers.

The autonomous units were part of further large-scale tests late last year, with Russian armed forces chief General Oleg Salyukov confirming the Uran-9 would be accepted into service by the Russian Ground Forces during 2022 for both combat and reconnaissance purposes, according to military publication Janes.

And in the air, Russia reportedly has been working on developing AI-guided missiles that could decide to switch targets mid-flight since at least early 2017, emulating advanced technology in the U.S. Raytheon Block IV Tomahawk cruise missile.