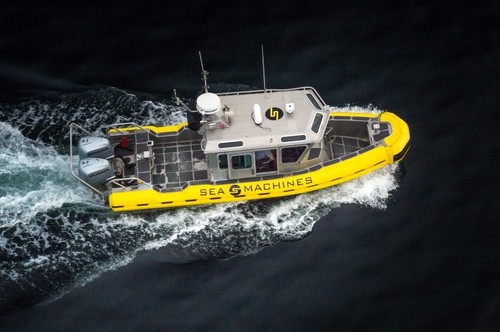 Because AI doesn’t get sea-sick

An autonomous vessels specialist has closed a $15m funding round backed by the largest military shipbuilding company in the US, Huntington Ingalls Industries.

Sea Machines Robotics developed a platform for line-of-sight and remote-vessel control in 2018, but has increasingly focused on self-piloting systems.

At the moment, Sea Machines still wants humans in the loop (but not necessarily on the vessel) - primarily pitching AI as a way of reducing repetitive tasks, reducing fatigue, and improving predictability. The long-term goal, however, is to create completely autonomous systems.

“We are entering a phase of growth and universal interest like what was witnessed in the self-driving automotive space starting five years ago, but the difference being that marine self-piloting systems are already operationally deployed,” CEO Michael G. Johnson said.

“We expect to see broad adoption of autonomous technology on water ahead of that on roads.”

The new investment comes with the benefits of an undefined partnership with investor HII. “Being selected as technology partner by HII, a leader in every right, further affirms our course in product and market approach,” Johnson added.

Last year, the Department of Transportation’s Maritime Administration agreed to test a system that included the company’s 'TALOS' product – the technology that actually connects the autonomous sensors to the vessel's propulsion and navigation equipment.

Thanks to its latest $15m round, Sea Machines expects to win further deals, as it seeks to prove its technology out in the field ocean. The round was led by Accomplice with participation by Toyota AI Ventures, Brunswick Corp, Geekdom Fund, NextGen Venture Partners, Eniac VC, and LaunchCapital.

“Five percent of global GDP is directly fueled by the marine economy and the industry is poised for technology innovation,” said Ryan Moore, partner at Accomplice. “Michael and the Sea Machines team have achieved significant progress and this financing underscores our strong position.”

Sea Machines competes with several other autonomous ship ventures; for example, Rolls-Royce and Intel partnered in 2018 to develop systems for autonomous cargo ships and IBM teamed up with Promare on a self-driving vessel, among others.

In the defense sector, competition is even more fierce, with most major military contractors developing autonomous vessel projects – including the BAE Systems P24 ship we saw last year.