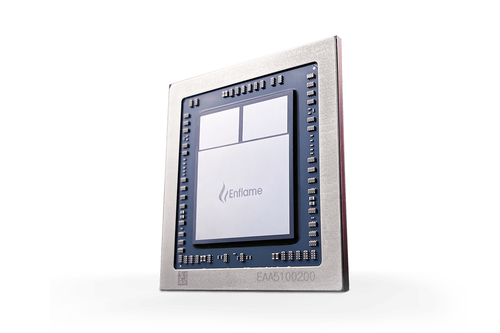 The company, known as Suiyuan Technology in the domestic market, has launched several AI acceleration products.

These include 'Yunsui T10' and 'Yunsui T11' for training scenarios, 'Yunsui i10' for inference, and the 'Yusuo' software platform for management and orchestration.

"Artificial intelligence computing power is the core of the future digital economic infrastructure, and it is a battleground for strategists in the hard technology field,” Zhao Lidong, co-founder and CEO of Enflame, said in a statement.

“In 2020, we successfully realized the commercial landing of an AI training cluster composed of Yunsui T10 accelerator cards in customer data centers. The completion of the C round of financing will bring a wide range of industrial resources to help our industrial cooperation, ecological construction, and business scale.”

The additional funding will allow Enflame to expand its recruitment efforts, advance the organization, and upgrade its support infrastructure.

"In the past two years, Enflame has rapidly launched cloud training and reasoning products with precise execution and collaboration, and has achieved first-mover advantages,” said Zhang Yalin, the company’s co-founder and COO. “As a technology-driven company, we have planned and are fully implementing the next three years. The product technology roadmap of the company will take the joint development of software and hardware systems as the core to carry out product iterations and establish competitive advantage in the market.”

Tencent, known for its popular WeChat messaging app, has been an early and consistent backer of Enflame, dating back to its Series A in 2019.