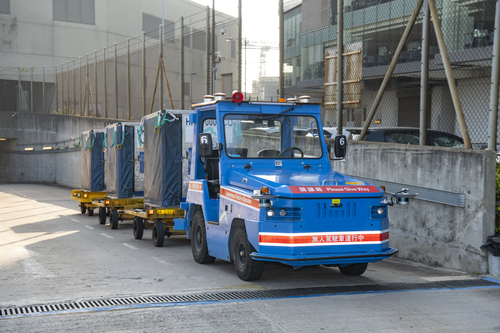 Focus on autonomous logistics and delivery

Chinese self-driving startup Uisee has raised one billion yuan ($150m) to ramp up R&D and commercialization of its autonomous logistics technology.

Among the investors in the company was the National Manufacturing Transformation and Upgrade Fund, a $21 billion investment vehicle set up in 2019 to pump money into Chinese manufacturing, backed by the Ministry of Finance.

The company currently sells autonomous electric tractors (AETs), which were first rolled out at the Hong Kong International Airport in December 2019. This January, the airport said that it would replace all of its baggage tractors with AETs.

Each tractor features eight HD cameras and three LiDAR sensors to help it traverse the airport. Similar systems have been sold to hundreds of clients across a number of industries, Uisee claims, adding that last year sales grew 150 percent over 2019.

The company also partnered with automaker SGMW (itself a joint venture between SAIC Motor and General Motors) to roll out driverless logistics vehicles in Liuzhou, the Guangxi Zhuang autonomous region. It claims that vehicles operating in the logistics hub have transported cargo more than 300,000 kilometers.

Logistics is generally seen as an easier target for autonomous vehicles, with environments far more controlled than out on public roads. Uisee does have a foothold in self-driving vehicles for consumers, licensing out some of its tech to the state-owned Dongfeng Motor Corporation.

"In the future, with AI and the Internet-of-Vehicles, cars will travel in formation on the road, and the efficiency of the use of a single lane will increase 3-4 times," co-founder and CEO Gansha Wu said at the AI Developer Conference last year.

As it shifts to compete for the wider self-driving market, Uisee will face a large number of well-funded rivals. Among them is WeRide, which has partnered with Karma and Nvidia, robotaxi company AutoX, and China's Uber-like Didi, which raised $500m last year just for autonomous development.