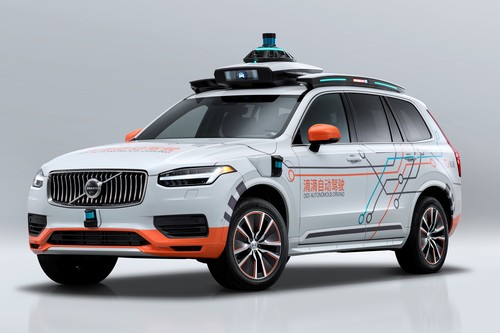 Volvo will collaborate with Chinese company DiDi Chuxing and its Autonomous Driving division to build a fleet of self-driving vehicles.

DiDi is based in Beijing and can be seen as the Chinese answer to Uber, with 550 million users across the country reported as customers.

The company’s new self-driving platform Gemini will be used in Volvo’s XC90 SUVs, with the intention that the vehicles will eventually operate as driverless robotaxis.

Although the XC90s will incorporate all the necessary hardware and software for fully autonomous driving, it’s been confirmed the Volvos will be equipped with systems for human-operated steering and braking.

The deal extends the collaboration between the two companies. Last year, Volvo provided DiDi with a fleet of smaller XC60 SUVs that were used in Shanghai’s first ever robotaxi pilot.

In certain areas of the city, customers were able to use the DiDi app to book trips in the XC60s and be driven autonomously, although each journey was supported by an engineer and a safety driver.

It is hoped that this latest development could pave the way for a long-term partnership, as DiDi continues to expand its autonomous test fleets across both the United States and China, and scales up its robotaxi operations.

“This strategic collaboration is a further validation of our ambition to be the partner of choice to the world’s leading ride-hailing companies,” Hakan Samuelsson, Volvo’s chief executive, said. “Combining DiDi’s expanding robotaxi programme with our safe cars creates a great match to build trust among consumers for autonomous ride-hailing.”

Neither company has given any indication as to when we might expect to see the robotaxis fully operational.

The deal isn’t Volvo’s first foray into providing vehicles for a ride-hailing giant. It previously partnered with Uber, which had intended to deploy self-driving taxis by 2019. This plan was scrapped after a test autonomous Uber XC90 killed a pedestrian in Arizona in 2017.

The Swedish company’s determination to be seen as a leader in the self-driving arena is becoming increasingly apparent. Just last week it announced a deal with Nvidia to use its DRIVE Orin tech in the next generation of production cars.